I went to a conference last week in Portland, and while there is plenty to say about that trip, for now I will just share this moment from the start of my trip.

I flew out last Sunday evening, and I arrived at the airport a good 2 hours before my 7 p.m. flight. Boston Logan is, as major city airports go, a fairly moderate and manageable size. Airport security typically goes pretty fast (at least compared to some airports (Denver, I’m looking at you)), and I expected to have a good chunk of time before boarding. For whatever reason, though, things went really slowly in security that evening. I watched my cushion of extra time dwindle away such that it looked like I’d be getting to my gate only a few minutes before boarding. Having finally passed through security and reassembled myself and my luggage, I wasted no time heading to the gate, which naturally was as far from security as possible in that terminal wing.

With my gate just in view, I looked out the window. It had been raining earlier, and the clouds had parted a bit to provide a spectacular sunset.

What’s more, there was a rainbow.

So imagine my excitement at seeing a rainbow. At an airport. (Because I also love airports.) My inner child was giddy.

My flight was scheduled to board in about 5 minutes, but I didn’t hesitate to stop to walk over to the window. I had my iPhone handy, and snapped a few shots. But they absolutely didn’t do it justice. I parked myself at some conveniently open seats at the gate closest to me (a gate which happily didn’t have a flight scheduled imminently). I unloaded my backpack, and dug out my camera with my telephoto lens.

What I found sort of hard to understand was that the vast majority of the people waiting around in the airport seemed to be completely indifferent to the stunning view. I say “vast majority” because I did overhear one guy on his phone nearby saying something about the rainbow and pretty sunset, but that may well have been in reaction to seeing me whip out my camera. (I think I made him look.) Nobody else appeared to be looking. I wanted to just stand at the window and stare.

But I also wanted to share, especially with my rainbow-loving children. I headed over to my gate, and found a seat. They hadn’t started the boarding process yet, so I figured I had time. I got out my laptop, and loaded the photos from my camera onto it. I sent an email to John with a photo, and posted it to Facebook as well. I may well have posted it here on my blog as well, but my row was called for boarding, so I had to pack up my laptop in a hurry.

I realized that if I hadn’t gotten stuck in security, I would likely have missed the rainbow. (I’d likely have settled down at my gate and buried my head in my electronics until called to board.) I wouldn’t have heard a peep about the rainbow from anyone around me.

Are most adults really so blasé about rainbows? 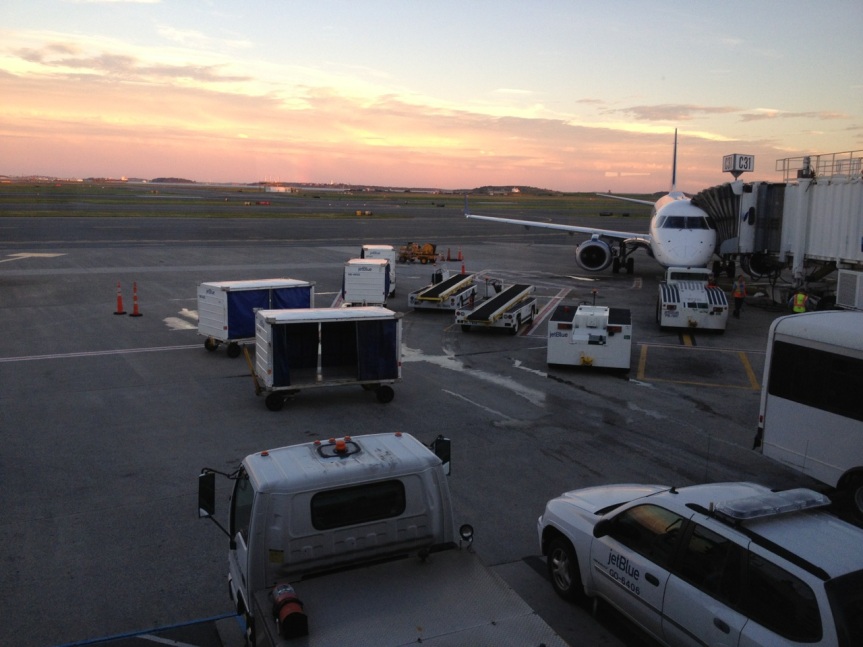 A photo taken with my iPhone. You can find the rainbow only if you know where to look. (It’s near the white rectangular structure near the horizon, about a third of the way from the left.)

Taken with the telephoto. 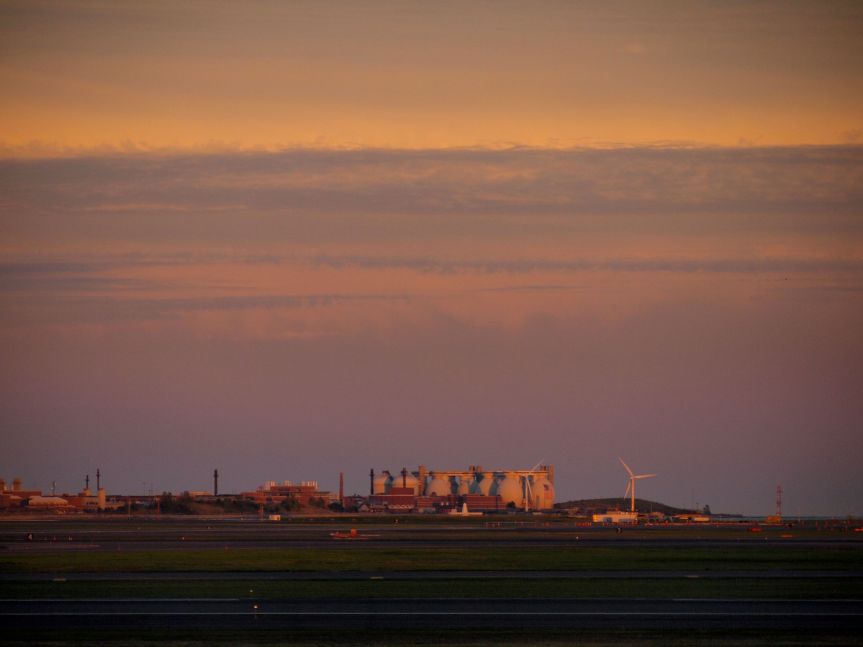 The scenery was beautiful even without the rainbow. This scene is to the left of the rainbow. The views of the sunset from the windows near my gate were also striking, but the crowds were too thick for me to get close enough to take pictures. 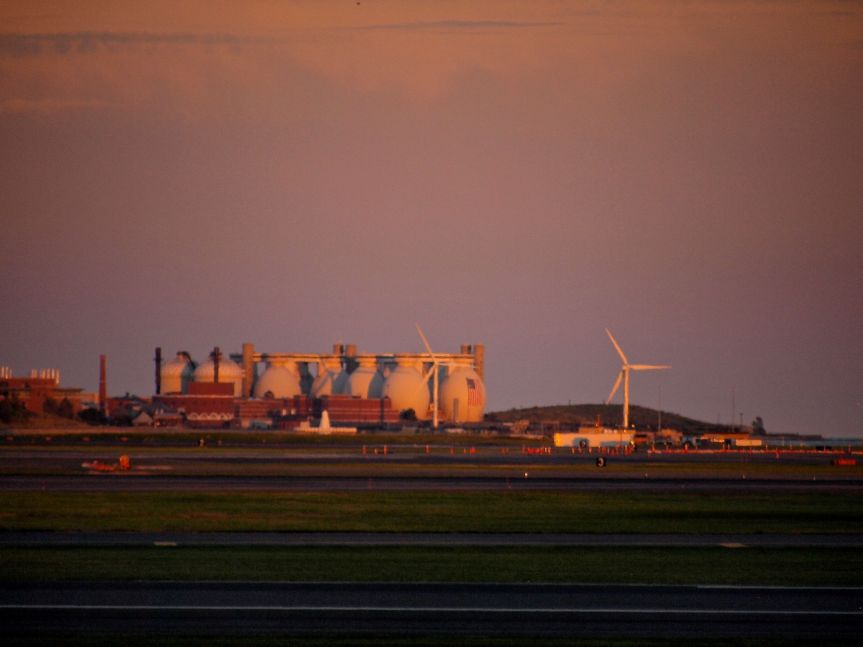 One last zoom of the windmills and big tanks just beyond the runways.

—
These were the photos I was considering for the friday foto finder theme of “right.” To see a rainbow, conditions have to be just right. You have to be at the right place at the right time, with the weather conditions and the lighting just right such that the water droplets are in the right direction from the sun.