This afternoon, when I stepped out on my front porch, the glint of a new spiderweb caught my eye. (I knew it was a fairly new web, as it was connected to some things I had moved around in the last week or so.) I looked at it admiringly, and saw that the spider appeared to have caught an insect. They hung there together in the center of the web.

As I looked again more closely, I saw that my first impression was wrong: It was not the spider who had captured the insect.

What looked to be shaped like a rather large mosquito, with a body perhaps a centimeter long, was affixed to the abdomen of the small green spider. I could see slight movement from the pair, and as I looked closer, I could see fluid moving and pulsing in the insect’s translucent abdomen as it drained the spider.

Upon further examination, I saw that the insect looked rather like a small dragonfly, but with wings lying down flat along its abdomen. (I have since decided that it must have been a damselfly.)

I’d never seen anything quite like it, this tiny drama of life and death. The embrace of the two creatures looked intimate, their bodies pulsing slightly and glowing in the late afternoon light. (Ever the voyeur, I naturally ran inside for my camera.)

I watched (and photographed) for a few minutes before I tore myself away to run an errand. When I returned, perhaps an hour later, I found the web empty. It was remarkably unscathed from the recent drama. The damselfly was long gone. 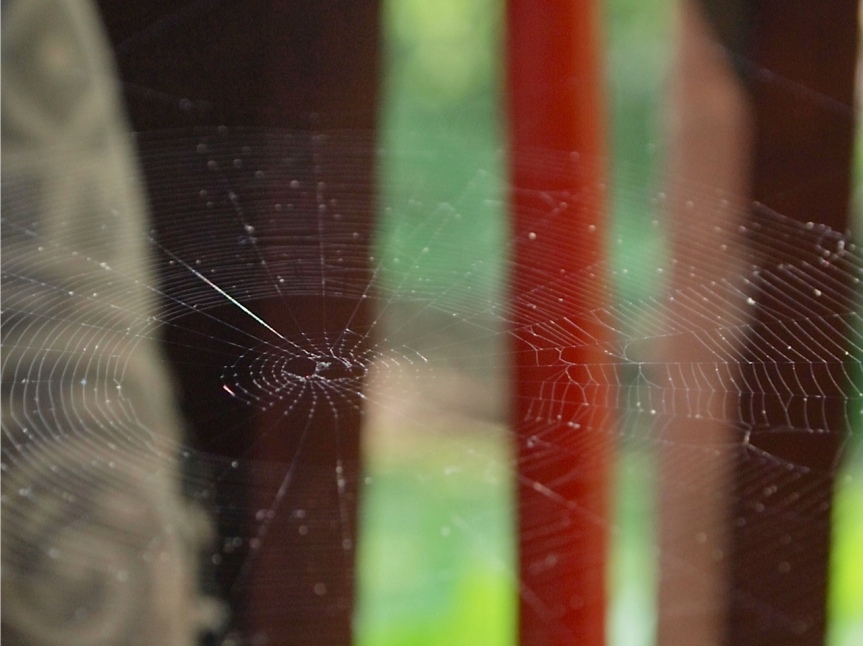 I looked around for the spider, so obviously not on the web. I found its little body just below the web. I nudged it out into a patch of sunlight with a straw that had broken off a nearby broom. The body was stiff and very light, drained as it was of fluids.

Sometimes things really don’t turn out how we expect. The spider had built such a lovely web only to be caught in it itself. It met an insect that was rather more than it had bargained for.