Thanks for your letter. I did get it as planned on July 26th,  and the alarm went off, as planned. I couldn’t motivate myself to write right away, though. I didn’t exactly go back to sleep. But I did hit the snooze button, so to speak. For four months.

Anyhow, I’m doing okay, thanks. At least, me personally and my family. We’re all in good health, and not in any immediate danger.

As for the country as a whole, and the whole world? Well, things aren’t looking so great.

It’s not exactly that my worst fears were realized, because, let’s face it, my worst fears are a touch dramatic. I can safely say that, at the very least, we haven’t yet devolved into a post-apocalyptic wasteland, and I haven’t been jailed as a political dissident. Other than that, though, the outlook isn’t great.

You’d hoped that impeachment processes would be underway,  but in spite of some petitions and the occasional vocal politician, we haven’t had much progress. There have, though, been ongoing investigations into collusion with Russia from the Trump campaign. So maybe there’s still hope there.

One recent bright ray of hope came in the form of state and local election results earlier this month. Around the country, we saw that progressives are ready to fight back. If we can keep up the momentum, the 2018 and 2020 elections look promising as well. But there’s a lot of work ahead.

You wondered if I’d still be resisting, and I generally am. I did attend the March for Science in Boston, but I haven’t managed to attend any other marches. I know it sounds like excuse-making, but I have had reasons. Schedule conflicts or insufficient time to plan. I haven’t yet found a Black Lives Matter event to attend. I guess I need to try a little harder.

I did finish reading the New Jim Crow, but the online discussion group that prompted me to read it largely fizzled out. I did attend the talk in February on dialect discrimination. I also helped to organize a workshop addressing systems of oppression through the social justice group at a friend’s UU church. I am also happy to say that I did start volunteering with immigrant populations, and have started working as a volunteer ESL tutor through the public library of a neighboring town. It feels productive and personally enriching in ways that many of my other efforts don’t. 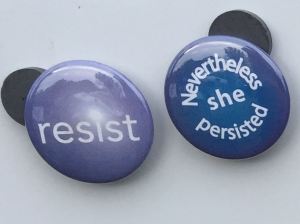 As for my work with my Democratic Town Committee, there I can honestly say that I have not let that ball drop. I have invested many hours on outreach projects, including design and a mailing, contributing to our social media presence, publicizing and attending events, and even spearheading the design and construction of a float in our small town’s arade. I have been following state and local races, and supporting progressive candidates. I’ve attended meetings and trainings and fundraisers.

I have channeled much of my angst and worry and anger about the national scene into my efforts on the local scene. More than ever, we need to keep progressive voices in the House and Senate, because they are fighting the fight every day. We need to have progressives in our state legislatures, because this is our best chance to preserve what progressive  policies we have, at least close to home.

Yes, I am tired, as you imagined. As you and I both know, I tend burn the candle from both ends preparing for an event. Then my health tends to suffer afterwards. But then I recover, rally, and dig back in. I am still very aware that what is going on in our government and our society is not okay, and not normal. I have been horrified by the numbers of people who feel able now to openly embrace and display their views of white supremacy, and disgusted that this administration fuels that display of hate. All the institutions and groups of people we were worried about in January are still just as threatened. There are good people who are fighting back, though, and this gives me some hope. The press is still free, and and far as I know, people can still protest and freely assemble. But it does give me a nagging sense of worry that the frequency and visibility of protests has decreased. I am not the only one who is tired.

Your big question for me, which I really can’t ignore was: Are you paying enough attention?

I’m afraid that the answer is probably “no.” The constant alarm bells, such as about attacks on healthcare, net neutrality, horrifying judicial appointments, threats of war, and so much more, are causing so much noise, that I am surely missing a lot.

While I am worn out and deeply worried, I am also bolstered every day by my friendship and connection with friends and family members who share my values and worldview. I know that there are many of us, and we are not going to back down.

I also do not doubt for a moment that we are on the right side of history.

The Current Present Day Me, Who is now 10 Months Older than the Me who wrote that Last Letter

p.s. I realize that you can’t write back this time, because you are in the past, and I don’t believe we have access to time travel. But perhaps another Future Me will write back to us both.

p.p.s. Not sure I can blame it on the crumbling democracy, but I’m still not finished with my work for the NSF grant. I’m still giving at least part of my time and attention to my work as a researcher, though.

p.p.p.s. I totally forgot about that puzzle. Did not even try to finish it, and probably never will.

This post is a follow-up to one I wrote 10 months ago, setting an alarm (a letter to myself 6 months from now),  the motivations for which I described thusly¹:

This post was inspired by a quote shared by a friend on Facebook, excerpted from a column in the New Yorker:

At a writers’ protest organized by the PEN America Center, on the steps of the Metropolitan Museum last Sunday, Andrew Solomon, the organization’s president, decrying Trump’s apparent disregard for free speech, quoted a South African friend who had lived through apartheid: “ ‘What is most shocking is not how shocked you are right now, what is most shocking is how unshocked you will be in six months time.’ ” Solomon went on, “When I heard him, I took it as an occasion to declare that I will remain shocked. That we will remain shocked.” –Emily Eakin, The New Yorker, January 20, 2017

I commented that the quote made me feel like I should set an alarm. I have effectively just done so. I put an event on my calendar for 6 months from today: RESIST. I wrote in my new paper planner, and put it in my computer with it set to alert me a day before. I very much hope that I remember what this means.

This post ended up being super long, in spite of my efforts to trim it down. If you’ve made it this far, thank you. I’d love to hear more ideas about how to keep the resistance going. What have you been up to? What do you hope to do next?²

¹ I also wrote that post as my third entry in #52essays2017, a project to write and post an essay each week this year. Clearly, I have not kept up that weekly challenge.  If I had, this would only be my 4th essay. (To read more about the 52 essays project, visit Vanessa Martir’s Blog.)

² In case you wondered about the images in the post, they are some buttons I made. I couldn’t wrangle up swag for an event, so I decided to design and make some of my own.