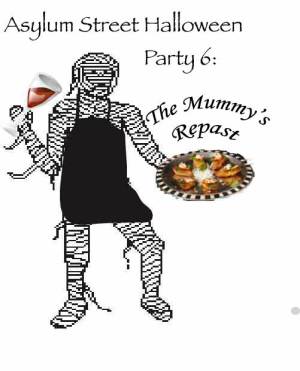 We had our Halloween party last Friday. It was a “costumes optional” affair. As hostess, of course I had to dress up. (Okay, fine. I love to dress up.) I decided to be a mummy. It seemed appropriate. You know, seeing as I’ve been pretty wrapped up in myself. And feel a bit holed up and isolated. And starting to feel old. Now that the air is getting dry with the crisp outdoor air and heated indoor air, my skin is a getting a bit shrivelled. (I don’t have time to shower most days, let alone moisturize…)

Oh, right. And then there’s the whole pun business. How could I resist?

My costume was a bit better in planning than in execution, but I guess it worked well enough. (It might not surprise you to learn that I ran out of time.) I used an old white sheet that had been in our rag pile, and tore it into strips. I then soaked the sheet in tea. (I used Lapsang Souchong, because I have a lot, and don’t drink it much. I also figured the musty smell would work.) I wore an off-white shirt and some off-white pajama pants, and wrapped myself. I stitched here and there and safety pinned to hold things in place. There wasn’t too much time, as I started the wrapping about an hour before the start of the party, so I didn’t manage to wrap as much of myself as I’d hoped. Ah well.

John didn’t get any pictures till the end of the night, by which time I was largely unravelled. But you can still get the effect. (Go see the picture…if you dare…)

I also made Theo’s costume, though not Phoebe’s. Phoebe was a bunny, which was her idea. And a harder costume to track down than you might imagine. Theo was a carrot. I’ll try to get some pictures.