Last month, Magpie wrote some posts (and even a nonet) about baking bread. I left a comment saying that she had just about inspired to give bread-making a try, as soon as I got some yeast. She replied by sending me a link to Laurie Colwin’s recipe for oatmeal bread.

The idea with this recipe is that you can fit the steps of baking bread into a busy schedule, investing only 15 minutes of active work. You make the dough at night before going to bed, do a bit with it in the morning, and then bake it when you get home in the evening.

Once I finally got around to remembering to buy yeast at the grocery store, and after an additional wait for another shopping trip because I’d forgotten that the recipe also called for wheat germ, we were good to go.

I thought that making and kneading the dough would be a good activity to do with Phoebe, since she really likes to help. (I’m eager to train the kids for hard labor, which should free up more of my time for blogging. Or maybe I should just train Phoebe to blog for me.)

The recipe suggests that the whole process should take only 15 minutes. I figured that the first step shouldn’t take much more than 10 minutes. With my cluelessness, I planned to tack on another 15 to 20 minutes. And then with Phoebe’s help, we knew to expect things to take at least an extra half hour.

I’ll let you decide whether Phoebe liked the process. 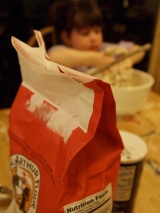 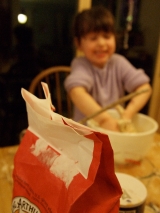 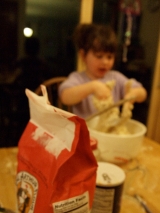 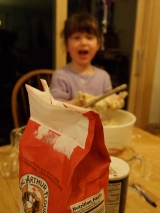 Phoebe smiles for the camera. (“That was a really big smile,” she said afterwards.)

The next day, I “knocked down the dough,” which was a new expression for me, and split the dough. The recipe said to use 2 loaf pans. We have only one loaf pan, so I figured I try to make a “boule” on a cookie sheet. (As the dough spread more than rose, I think the shape of the bread could be better described as a “frisbee.” )

The resulting bread was tasty, but not quite what I expected. It was very dense. The recipe called for leaving the dough out to rise during the day, covered with a tea towel. My guess is that the air in our house is too dry this time of year for such prolonged exposure. It did seem like there was already a bit of a crust before I even put the bread in the oven, so I wonder if once that crust formed, the dough stopped rising. (I wonder if the tea towel used to cover should have been damp. I’m open to other suggestions, too.)

We had the “boule” (or “discus”) for dinner. The loaf bread, also quite dense, worked really well for slicing thin to make toast.

The flat-topped loaf, which worked to make tasty toast.

What was left of the discus could have been used as a weapon the next day.