During my short visit to New York City last August, I left the conference to stop back at my friend‘s hotel room to collect my luggage. (She had been kind enough to put me up the night of my arrival.) The room was up on the 16th floor of the hotel, high up but still deep within the canyons of the tall buildings. I looked out the window, admiring the view, and was struck by the reflections on one of the buildings opposite. The glass of the windows revealed its subtle curves in the shapes reflected back to me. The hotel I was in, as straight-laced and straight-lined as you might expect from a Manhattan hotel, was rendered in improbably wavy and curving lines. It looked as if the building had been designed by Gaudí. 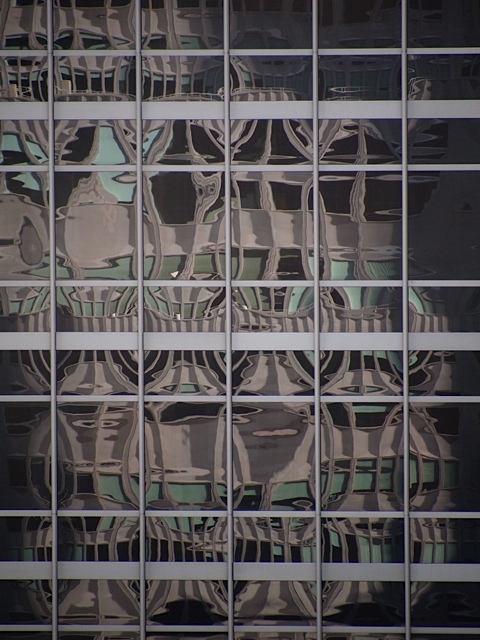 As the late afternoon sun lowered, the light reflected through the mazes and canyons of tall buildings shifted. The scene reflected before me changed, offering more and more architectural reinterpretations. I stood at the window taking photos, barely noticing the passage of time. (Though later I realized that I had been watching and photographing for at least 20 minutes.) 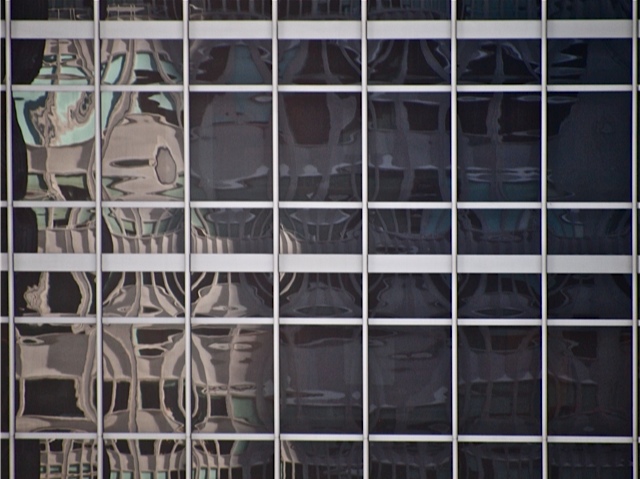 As with many things that I really like, it’s hard for me to pin down why they appeal to me so. In the case of distorted reflections, I like the way reality is visually reinterpreted. I find it fun to recognize the lines and the forms, but rearranged. Depending on the nature of the distortion, the effect can be beautiful or ridiculous. Human forms are typically redrawn in ways that are both amusing and unsettling. Landscapes are often abstracted in pleasing ways, such as the look of bold brushstrokes from rippled water. The reflection on a small, smooth curved surface can show an intriguing miniature world.

I also find the term distorted reflections to be appealing in its own right, as it carries a double meaning. It reminds me of how our thoughts and perceptions of the world are always filtered through our own experiences and personalities. If you and I both witness the same event, we likely will both interpret it differently, as we each see it through our mind’s own lens.

Interestingly, I hadn’t listed distorted reflections on my working list of topics “40 posts on things I like,” which is surprising given that I had considered making it my theme for an entire year of project 365 photos. (I decided instead to spend only the first month working with reflections, and didn’t stick to distorted ones at that.)