Yesterday was my CSA share pick-up day at the farm, again. And like the last 2 weeks, the share included 10 pounds of tomatoes. Here they all are in their polychromatic glory:

We also got some onions, a couple of small summer squashes, eggplants (I traded in my peppers for some extra eggplants), and some more basil. Inspired by Magpie Musing’s face of last week, I have put together my own vegetable face, based on the tradition started at The Great Big Vegetable Challenge. 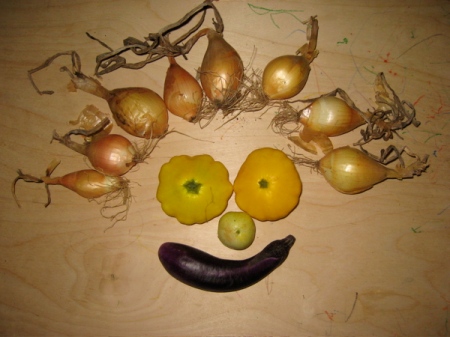 I have quite a bit of thyme left from last week. (Also some basil and tomatoes.) I just roasted some potatoes with olive oil and thyme. But I may have to freeze it, as I don’t think I can use all of it before it goes bad. I don’t want to waste it. (Yes, I am fighting the pun. Fighting it!)

We had some friends over on Saturday, and I was able to use some of the thyme in a couple of dishes. My guests (at least those over the age of 5) each lent a hand with some food prep, including plucking thyme leaves off the sprigs.

The problem with cooking with thyme is that it is an herb that asks, begs and screams out to be used in puns. One of my guests abruptly cut off another guest in mid thyme-pun with a “don’t!”, but then shortly after succumbed to one of her own thyme puns. (“But you wouldn’t let me!” the interrupted guest cried.) It is a devilish thing. Some of the puns were not even entirely intentional, such as:

I challenge you not to think up any of your own.

Anyhow, dinner went well, and I had a grand time. (Though I was busy cooking most of the evening.) Here’s what we had for dinner.

And because one of my guests does not like a goat cheese, I made a second fritatta.

Dessert was ice cream. I didn’t make it. (In a previous life, I would have made 2 or more desserts, and served things up in courses.)

I wanted to show my guests how pretty the vegetables looked, but realized that I wouldn’t have time to do all the preparation after their arrival and still eat at a decent hour. So I took a photo. The round orange vegetables that look rather tomato-like are actually Turkish eggplants. The photo also includes a bowl of the roasted tomatoes, and a small bowl of the roasted garlic cloves, as well as the little bundle of thyme that I have not yet wasted. Plus a couple of little zucchinis that didn’t make it on to the menu, and which I ended up wasting. I just can’t think of any good jokes about wasting zucchinis. Certainly not any puns.