I had grand ideas to have Phoebe and Theo’s Halloween costumes coordinate in some way. As Phoebe wanted to be a bunny, I thought Theo (who had no input in the matter) could be a carrot.

I early gave up on the idea of making Phoebe’s bunny costume, thinking that it would be easy to find one ready-made. I had plans to make Theo’s costume as well as my own, and thought making 3 costumes would be insane. We had some trouble finding a bunny in her size, as it turned out, and ended up ordering online. But seeing as I am a pathological procrastinator, we did so only a week before our party.

A few days before the party, we got a bit antsy, and when we saw a much-discounted white kitty costume, we decided to get it, thinking that I could transform it into a bunny in a pinch. As it turned out, the bunny costume arrived the same day. But, it also turned out to have enclosed plush-covered feet. Such that one could not wear the costume with shoes. As one might want to do when walking outside. Such as one tends to do for trick-or-treating.

So, we decided she could wear the bunny costume for our party, and then the kitty cat for trick-or-treating. (And as such may have set the expectation for future years of having two costumes for Halloween…)

I did manage to make Theo’s carrot, using orange fleece (so as to need minimal hemming) and some green felt for the greens. I made up a pattern for carrot bunting-type thing as well as a hat. We don’t have a sewing machine, so I stitched it up by hand. Much of it while I was on the phone for a work conference call a few hours before the party.

And, because I had to go and run off at the mouth (or whatever the typed equivalent is) about having each of my posts this month feature some word that I like, I felt compelled to follow through in some way. And while I do think the word bunny is a fine word¹, it seemed a bit…um…fluffy…as a followup to yesterday’s omphaloskepsis.

So, I dug up a couple of new words to go along with this post. Both of these are from a site called Luciferous Logolepsy. 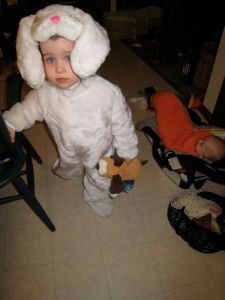 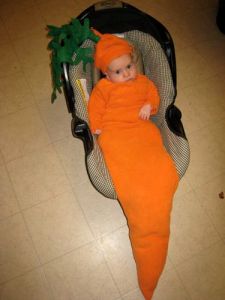 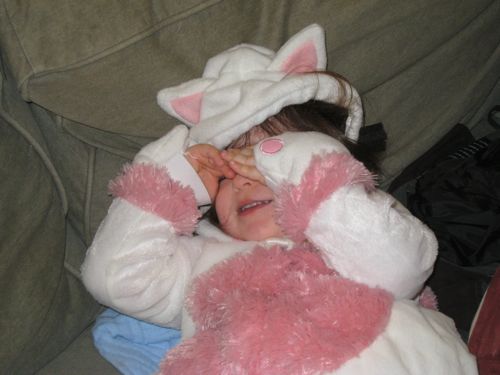 Here is Phoebe as a kitty. No bonus word for this image, unless someone else wants to add one.

¹ I did discover though, that in British English, bunny can refer to a squirrel. Which funnily enough was Phoebe’s costume of last year.

16 thoughts on “bunny and carrot (and also a cat)”