It’s ended up being a rather long week for me, and it’s far from over. I’ve already made 2 trips into Boston, and have plans to go in another 2 days. (I generally try not to have more than 3 commutes in a week, as they are tiring, time-consuming, fuel-consuming and expensive.) However, my program is running/hosting a conference this weekend, and I’ll be both working and socializing with people who are in town for the conference, not to mention attending talks. I was this close to staying over with a friend tonight nearer to Boston, as there are a couple of talks I wanted to attend in the first session of the day. (What cruel person put the only 2 intonation talks in that slot?) My plan had been to drive into town after the kids went to bed.

But as I was rushing to get groceries before picking up the kids at daycare, after trying to fit in several days of work into a few hours after having had Theo out of daycare for two days due to a fever, I thought about how tired I was. Then I thought about what a long day I’ll be having tomorrow anyhow, as I’ll be volunteering for the conference from 10:45 to 5:45 (with significant breaks, at least, though I may be meeting to talk about work during those times) and then planning to attend the keynote, which ends around 9 pm. And I thought about how I have a deadline coming up on Monday, and another bigger one coming up in a few more weeks. And all of this thinking was before I discovered that I had a flat tire. So, I decided to wait to go into town till tomorrow morning, and try to get a bit more work done tonight. If I manage to get a good night’s sleep, I may still try for an early train, but most likely I’ll just leave home around 8:30, and will help John get the kids off to daycare and preschool.

(You know, I’m finding this posting in a restricted time business rather unsatisfying. Even this blob of a post–which feels rather pointless and whiny to me–has taken me over 20 minutes, though I am counting the several minutes I spent poking around in my photo library again before I started writing. Why must I be so slow? Ah right. I’m tired.) 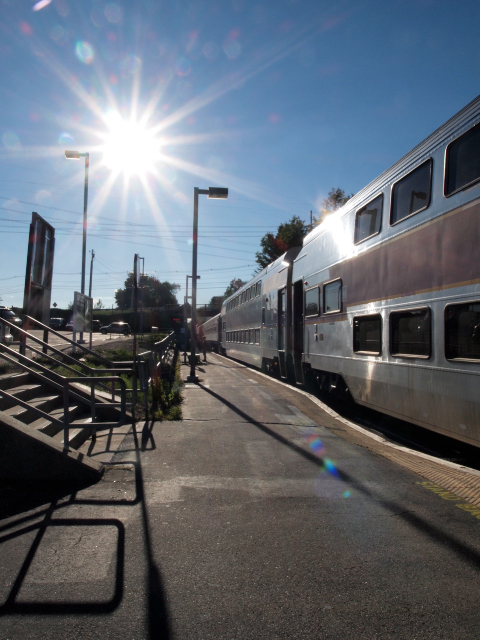 This photo was from September of this year. I’m pretty sure that those rainbow bits of flare are due to my lens being dirty, but I think they add to the photo. A bit more flair, perhaps.

4 thoughts on “back and forth”