Theo in the glow of the fire engine lights.

The town next to ours, which is where Phoebe takes her karate classes, has a parade each year a few weeks before Christmas to mark the lighting of the trees on the town green. The parade includes marching bands and groups from local businesses and organizations. I wouldn’t describe most of what is in the parade as being “floats,” but there are a number of trucks pulling decorated trailers. In fact, Phoebe’s karate school participates each year, and invites all students to come in their uniforms and ride a trailer in the parade. This was the second year that Phoebe got to be in the parade. (This is her third year in karate, but that first winter, when she was not yet 4, our timing didn’t work out to meet up with the group. Plus it was a miserably cold, wet, sleety night.)

While John and Phoebe went early to meet up with the karate school to ride the trailer, Theo and I went a bit later to watch the parade. Last year, I tried so hard to get a picture of Phoebe in the parade, and failed miserably. This year, I decided I’d just try to wave to her. It was a much happier experience.

It was a chilly evening (they wait until it starts getting dark to start the parade, as it ends with the tree-lighting), but Theo and I enjoyed ourselves. We stopped in at a bank to hear a barbershop quartet (lots of the downtown business host events), and then wandered up and down the sidewalks to keep warm until the parade started. The highlight for Theo was almost certainly seeing the firetrucks. In fact, he may have had the impression that the event was primarily a firetruck parade. Firetrucks not just from the town, but from many neighboring towns, participated. All were decked out in some sort of holiday decorations (I think there may be a contest), and all had lights and sirens blaring. It was quite loud. Theo was enthralled.

I’m sure that at some point in my life, I might have mocked this sort of event, but I admit I find it a charming holiday tradition. It was all so very earnest. And while pretty much all of the participation by local businesses was no doubt done for PR and advertising reasons, the event didn’t feel very commercial. It wasn’t about stuff. It was about community, and festiveness. And really, really loud sirens.

A specimen of the decorated vehicles on parade. 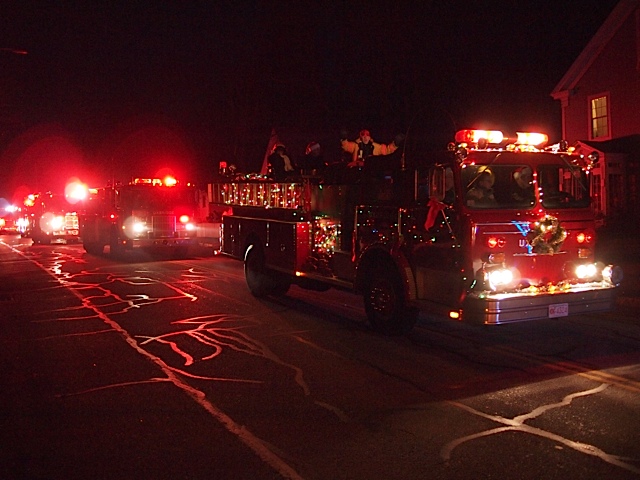 A few firetrucks in the long, long line. 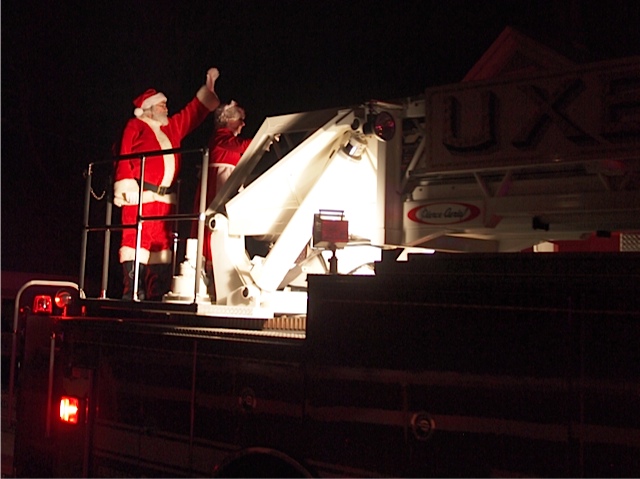 The last firetruck brought Santa. It’s his job to turn on the trees.

3 thoughts on “lights and highlights”