I know that everyone and their mother and their dog and the fleas on their dog’s back is thoroughly and entirely tired of hearing about the stinkin’ US presidential election.¹ But this time, I’m going talk about a different race: the Massachusetts senatorial race. Not even really about the race. About the sign we have in our front yard. (But maybe your dog and its fleas should leave the room, anyhow.)

Early in 2010, Massachusetts held a special election to fill the seat that had long been held by Ted Kennedy, after his death. I was not happy about the results.² Happily, there is a new candidate for senate this time, and one I enthusiastically support: Elizabeth Warren.³

I have been marginally involved with the Elizabeth Warren campaign. I did a very small bit of phone banking, and an afternoon of door-to-door canvassing. And I signed up to put up a yard sign.

This may seem like no big deal, but it actually was a bit of a deal. Perhaps a medium-sized deal.

We’ve never had a yard sign up before. We support candidates in a variety of ways, but not typically with signs. One issue is that we are non-confrontational, and somewhat private. Anyone who knows me well knows how I lean politically. But it has generally not been the case that people who don’t know me well would necessarily know.

It should also be noted that while we live in a blue state, our town is far from blue. We live in Scott Brown territory. Back in August, when I put up our sign, I don’t remember seeing any other Elizabeth Warren signs. (Happily, there are some others scattered around town now.)

You may wonder whether having a sign up does any good at all, but I have to say that I think it matters. Especially in areas where signs for one candidate dominate. People driving by see that there is diversity of opinion. Closet supporters of a candidate feel heartened. Open supporters feel bolstered. (I know I am happy whenever I see other Elizabeth Warren signs in my area.)

But, it also publicly marks us. And in these rather ugly times, with so much open hostility surfacing with election, that’s not always a comfortable feeling. One afternoon, while I waited at the top of our driveway for Phoebe’s school bus, I noticed someone giving me a dirty look as he drove by. In the next day or so, our sign disappeared. Coincidence?

John’s response was to order 2 new signs. A few weeks later, we had a sign back up in the yard. The 2nd new sign was kept as a back-up, in case the new sign also disappearead.

I’m happy to say that our current sign has weathered both the ravages of weather and hostile neighbors. We have not needed to break out the emergency back-up sign. 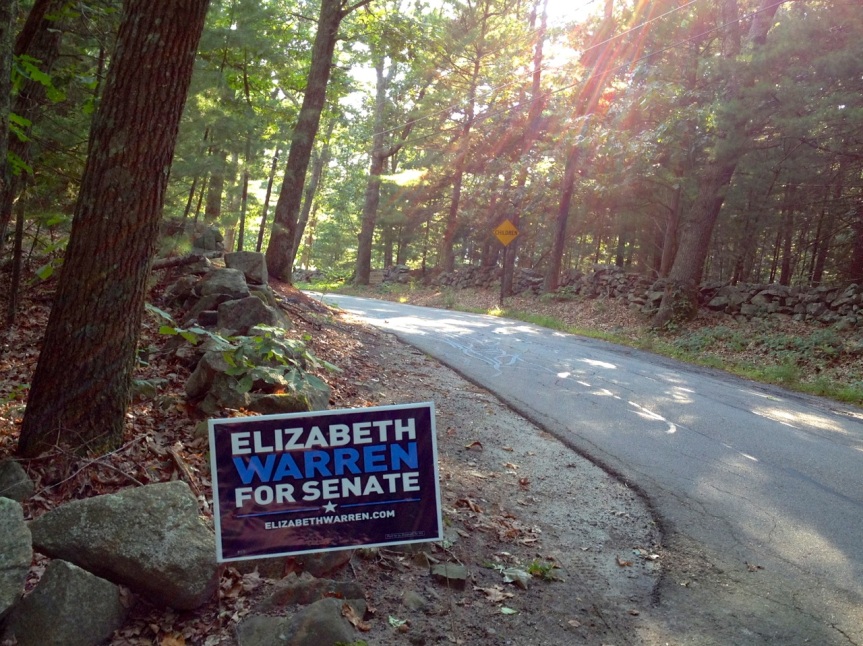 Here is our first sign, in early September, shortly before the sign’s disappearance. Note the green leaves on the trees. 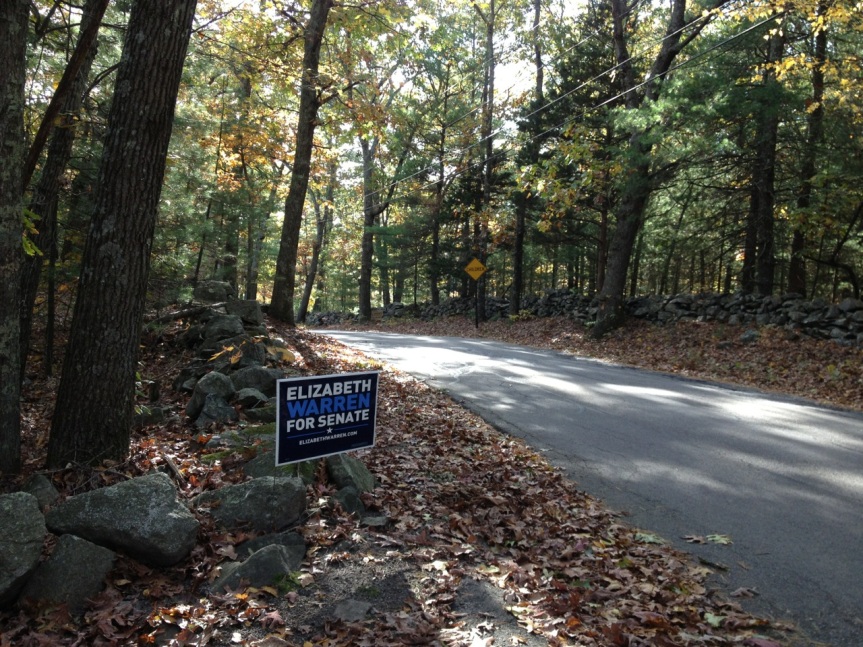 Here’s the sign again, just this afternoon. Still there! And check out all the leaves, none of which remain on the trees. 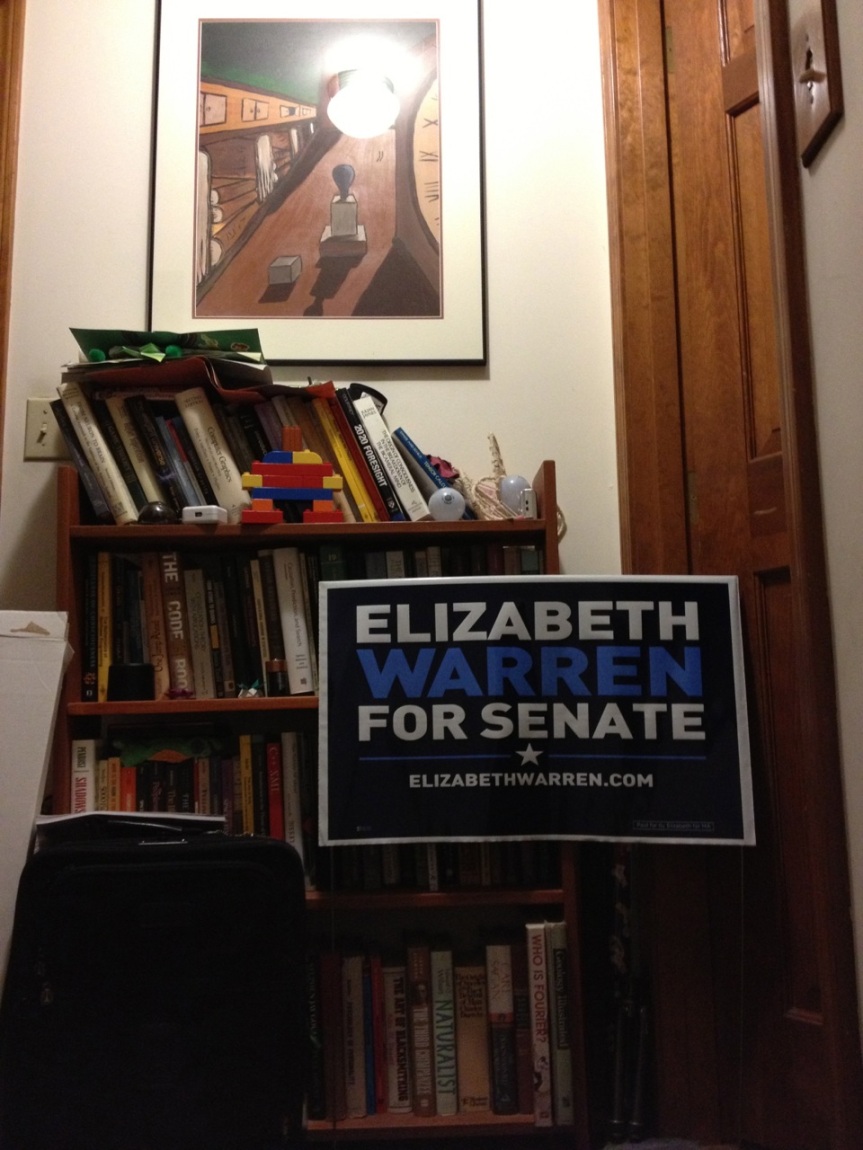 Here is our back-up sign, at the top of the stairs, in front of a bookcase. Note the lack of leaves, but the presence of a Duplo robot and some light bulbs.

Phoebe and I also got to meet Elizabeth Warren at an event at her Worcester campaign office, which was enormously exciting for me. I was more than a little star-struck, but Ms. Warren was gracious and kind, and spent several minutes talking with Phoebe. Here they are doing a pinky promise.

² I concede that Scott Brown has turned out to have been not as extreme as I feared, and has even occasionally broken with his party in his voting. However, he still by and large doesn’t represent me and my views. But I don’t want this post to be about him.

³ The reasons I support Elizabeth Warren are many and varied, but a good indication of them can be seen from my results from ISideWith, a website that shows how well you mesh with candidates based on answering policy-based questions. I scored a 96% overlap with Elizabeth Warren, and only 52% with Scott Brown. (For the record, for the presidential race, my highest score, 97%, is for Green Party candidate Jill Stein. Second is Obama, with 90%. As for my overlap with Romney? 6%. I kid you not. That’s not a typo. Less than 10%. Of course, I don’t know how they determined Romney’s positions on policy, because they seem to be moving targets to me…)

13 thoughts on “signs of the times”