This week’s friday foto finder theme is game While I enjoy playing games, and we have loads of games around the house, I couldn’t remember any particular photos of games. I played with the idea of taking a new photo, but that seemed like too much work. Happily, I remembered this photo I’d taken in Beijing during my brief visit there in 2012. My cousin and I had gone to see the Great Wall in the morning, and returned to the city in the early afternoon. After a bit of rest and recovery, we went for a late afternoon walk, exploring some older neighborhoods of the city.

At one point, we walked along a street that ran parallel to a canal. The street and sidewalk where we were walking were several feet higher than the canal level. Looking down towards the canal, I saw walkway that ran alongside it where there were bunches of people standing and sitting around tables, playing and watching games of mahjong. I paused to take a photo, but one of the onlookers looked up at me and glared, so I kept going after taking only one photo. (I always feel a bit strange taking photos of people I don’t know, and yet I find that the presence of people often make photos much more interesting.) 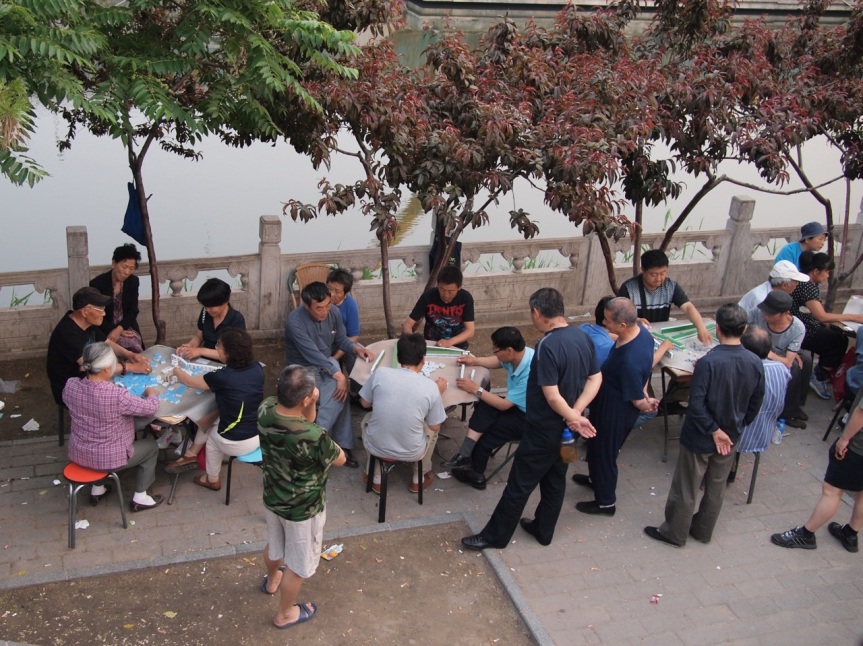 Even though I only managed one photo, it was fairly sharp, and when I zoom in, I can make out the mahjong tiles.

These are a couple of crops of that one photo shown at the top.

I actually know next-to-nothing about mahjong, and looking at this photo makes me sad about that. I’m sort of wishing I’d thought to buy a mahjong set while I was in China, as it seems like it would have been a meaningful souvenir for a game-lover like me.

To see what other games have been captured in photos, pay a visit to the fff blog. Want to play along? Sharing photos on a theme is a fun game in and of itself!