The last few weeks have been a storm of productivity and activity. John and I have both made it through some major professional deadlines, and our metaphorical skies are just clearing up.

Last Monday was a particularly big, and successful, day for both of us. My commitments had kept me in Boston late, so John ended up taking the kids to his evening karate class. I headed to the karate school to collect the kids, and ran into a quick summer storm. As Phoebe and I left the school (Theo had decided to stay with Daddy), the sun was just coming out. We looked around, hoping to see a rainbow (because you know we love rainbows), but had no luck. “I can never remember which direction to look,” I said to Phoebe. As we drove home, I’m happy to say that I got my answer: look for the rainbow in the direction opposite the sun. As we drove along eastward through the winding and hilly roads, with the setting sun behind us, the rainbow would appear and disappear again behind the tree cover. At the top of one hill, the rainbow arched itself invitingly over a farm, so I pulled over to take a picture with my phone. 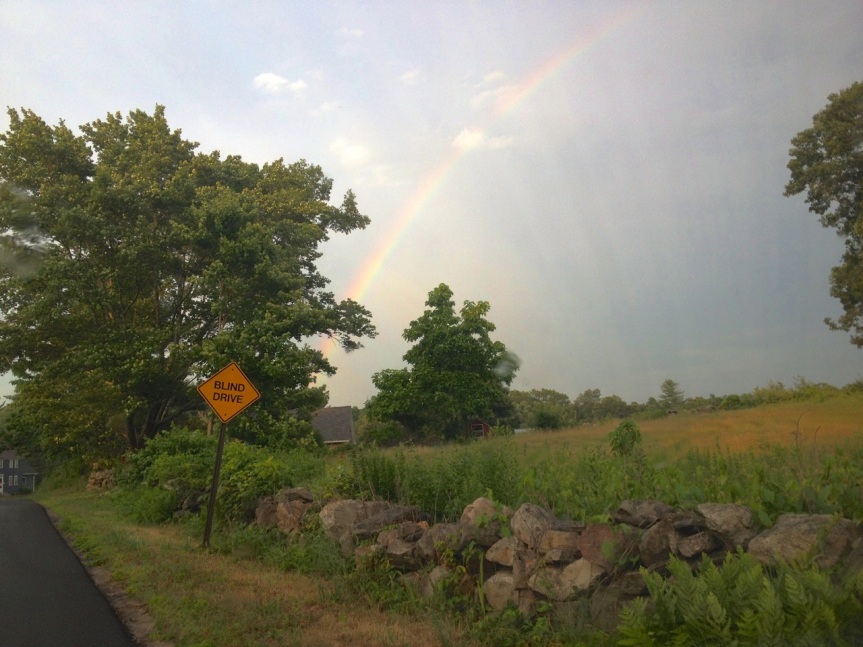 Back at home, I could just make out a hint of rainbow between branches of our tall trees over the driveway, but my phone couldn’t capture it. We decided to walk back out to get better views. Phoebe ran in the house for her camera, and then we walked back up the road towards the farm¹ (a different farm) at the top of the hill. We poked our heads into various neighbors’ driveways, admiring the rainbow’s arch in the clearings over each house. At one point, we saw that there was a double rainbow visible.

By the time we reached the top of our hill, the sky was clearing quickly, and the rainbow soon disappeared.

Since it was so nice out, we decided to keep going a bit on our walk. We went towards the cow farm, and waited for the traffic¹ to clear before crossing the street. 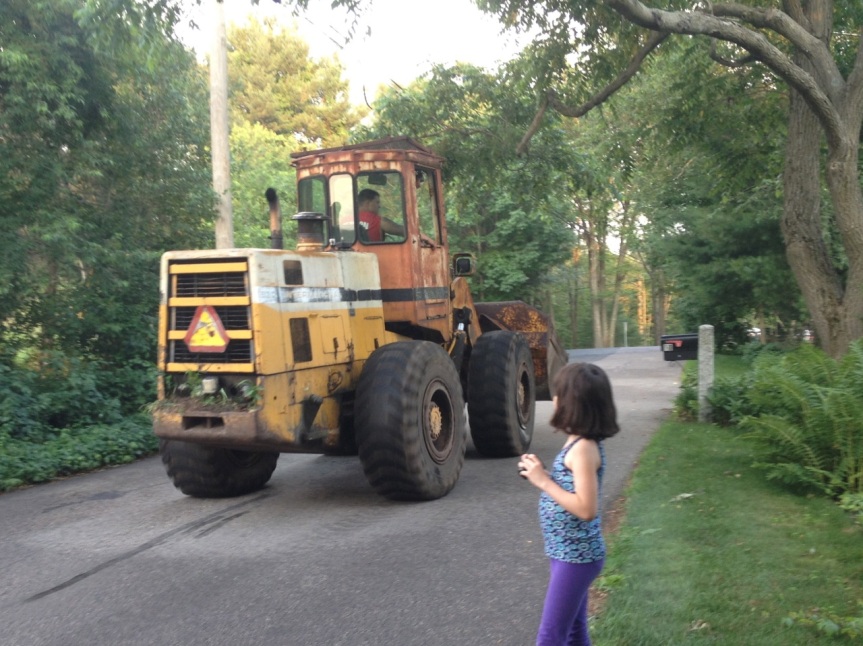 Then Phoebe and I visited with some of the neighborhood girls.¹

Anyhow, the rainbows and the walk were a lovely end to a big day.² It was fun to chase rainbows with my rainbow-loving girl.

¹ As I post these photos, it does really strike me how rural it is where we live
² For some reason, I’m having trouble actually coming out and saying what my big day was actually about. In case you are interested, I had my prospectus hearing, and met some deadlines towards a grant application, which (as of two days ago) is submitted. My first grant application. Perhaps I will say more about these at some point, but likely I’ll choose to talk more about rainbows.