Today’s plans were a bit of a washout. The kids’ swimming class at the town beach (on the lake) were cancelled due to thunderstorms, and the playdate we’d had planned for after the class as well. The day’s weather pretty much ranged from dark skies and heavy downpour to blue skies with scattered fluffy clouds. After a couple failed attempts to set up another playdate, we headed briefly to the playground. We stayed for a good while under the cheery blue skies, but left upon overhearing talk of thunderstorm and tornado warnings. Happily, the weather in our town was fairly calm, and tornado-free, but we did have a few more thunderstorms in the evening. Then the sun came back out for a bit before setting. This time, I knew exactly which direction to look for the rainbow. We looked out over the back deck, and were rewarded with some faint stripes of color between some of the trees. We watched for a few minutes, and then caught a glimpse of a lower and brighter arc of another rainbow, barely visible through the leaves. Then the colors faded. I didn’t get any photos. But wouldn’t you know, maybe 15 or 20 minutes later, there was a shift in the light again. This time, when I looked out on the deck, I could see quite a bit of rainbow. I grabbed my camera, ran out on the wet deck in my bare feet, and had time to get a few photos of the rainbow before it faded away again.

I was quite impressed by how bright the photo turned out. That top photo was not edited at all. Here’s another photo, a bit zoomed in, and with the brightness and contrast and such mucked with a bit. 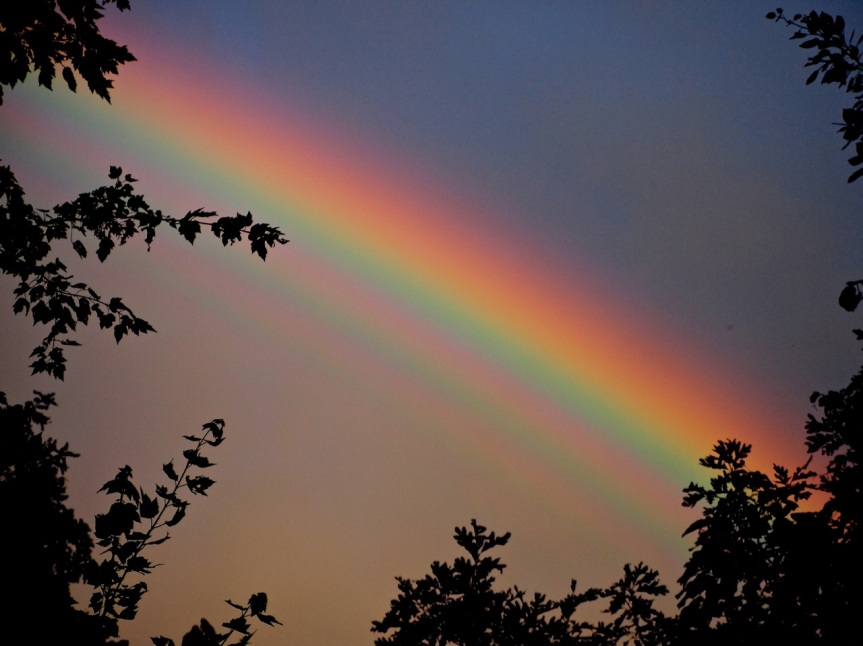 I found it interesting that as I mucked with it, I could make out more repetitions of the rainbow. Whereas the previous double rainbow of earlier in the evening, as well as that of a couple weeks ago had arcs that were quite spaced apart, this version had tight stack of rainbows. I can actually make out a faint third repetition of the color bands, and even the barest hint of a fourth.

Wikipedia tells me that this is a supernumerary rainbow:

A supernumerary rainbow—also known as a stacker rainbow—is an infrequent phenomenon, consisting of several faint rainbows on the inner side of the primary rainbow, and very rarely also outside the secondary rainbow. Supernumerary rainbows are slightly detached and have pastel colour bands that do not fit the usual pattern.

(Apparently, seeing rainbows is a good excuse to post.)

6 thoughts on “Another day, another rainbow.”