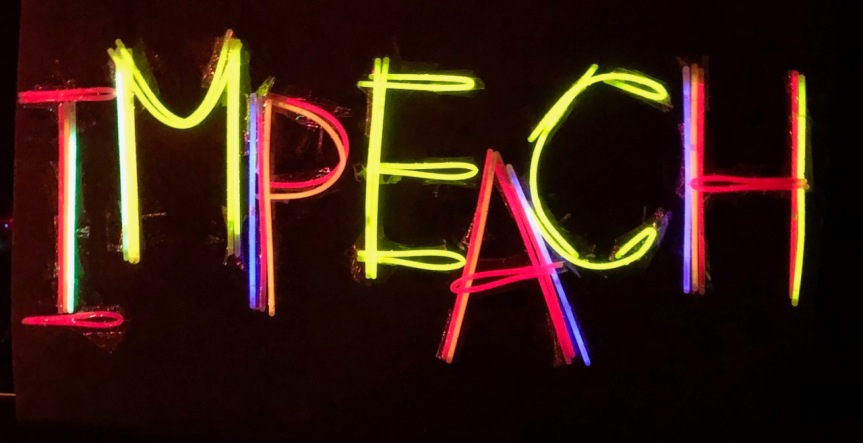 Last night I went to one of hundreds of events that were held all across the US in support of the impeachment and removal from office of the current occupant of the White House. Most rallies were set for 5:30 p.m., as the one I attended. Being up quite far north, and it being almost at the solstice, the sun sets a little after 4:00 here. So by 5:30, it’s oh-so-dark. Preparing for this, I wanted my sign to be visible.

I stopped by a dollar store Monday night, and got myself a black poster board and a bunch of glow sticks. (The cashier commented “kids just love these.” “Right,” I thought. “For the kids.”) 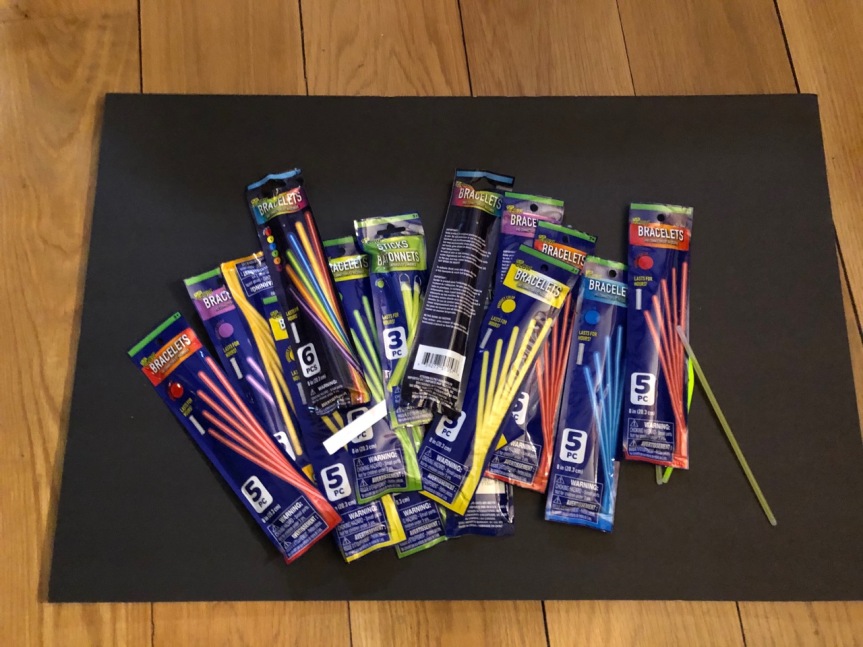 Tuesday dawned dark and dreary and covered in ice. Schools were closed. Government offices closed. Meetings were cancelled. But I heard that the rally was still on.

Seeing as glow sticks only glow for so long, I didn’t want to get ahead of myself, and waited until after 4 to get cracking. I cracked open the packages, and cracked the sticks to start the glow.

Then I used packing tape to secure my glowstick letters. (This turned out to be a bit of a pain, just because I was trying to hurry. And packing tape will not be rushed. It will wrap itself back around the roll, and your fingers, and whatever else is around just to show its contempt for your hurry.) I’d planned out how I’d make the letters, and counted out how many glowsticks I’d need for each letter. I’d thought about “impeach and remove,” but the sign wasn’t really big enough.

I was quite pleased with the glowing results. My sign was bright and visible in the dark. And my heart was warmed by the enthusiastic turnout at the rally, in spite of the ongoing ice storm. 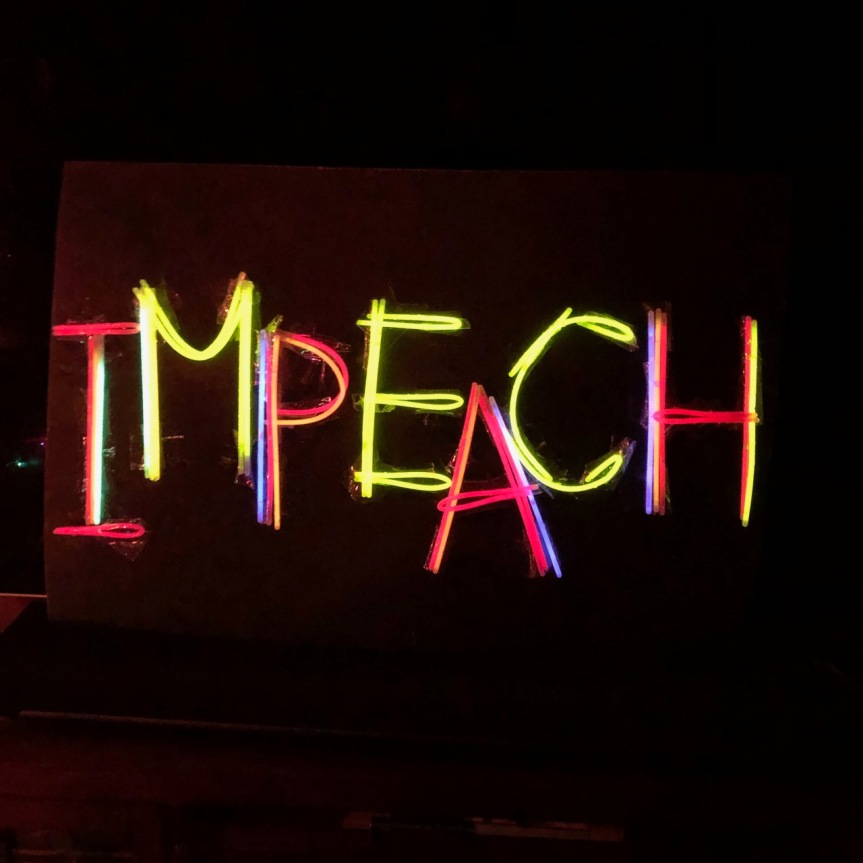 After the protest, I brought my sign back home to share its glow. And I made my Christmas wish. (Today I got at least part of my wish.) 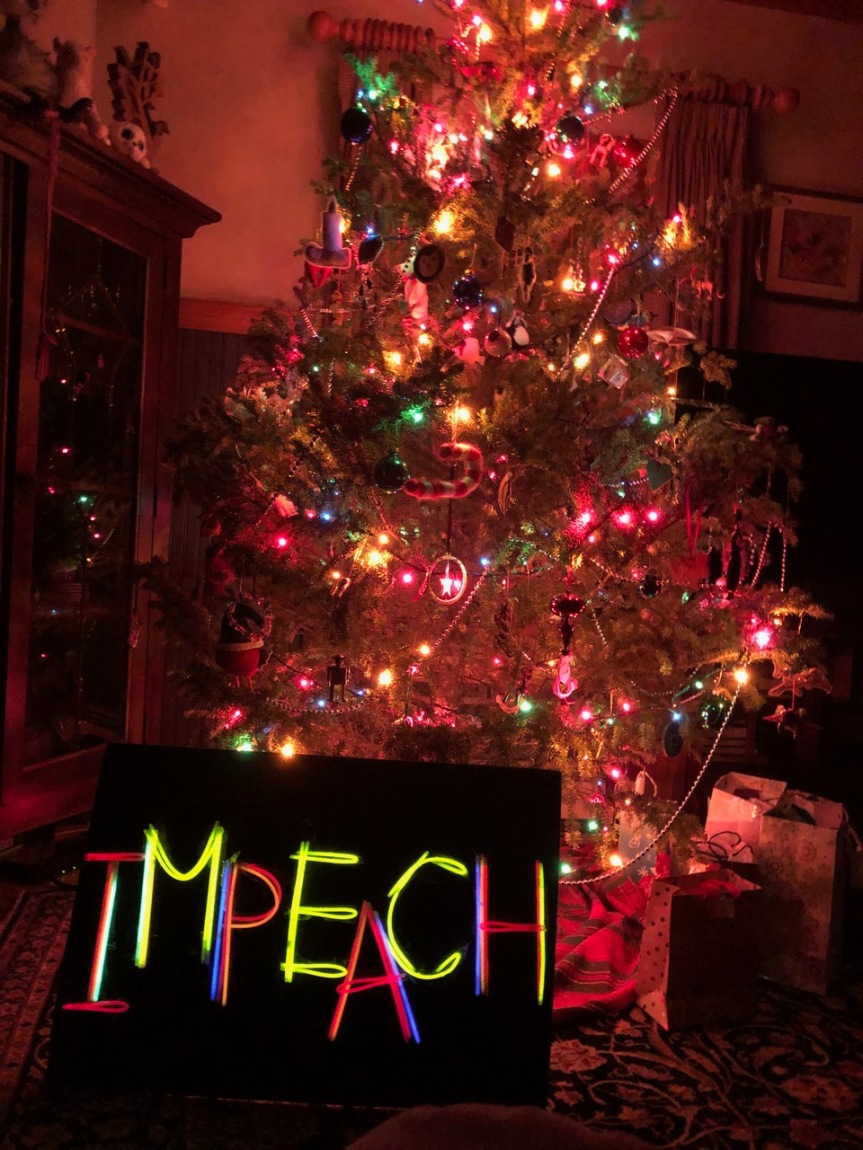 (And know that my merriment is only a coping mechanism in these dark times. The next few months and the coming election next year are very uncertain. Meanwhile,  I am thankful for my right to protest, and don’t take it for granted.)

One thought on “Impeachment afterglow”