The thing about deciding to post every day is that it means that every day, you are faced with the reality of posting something. Even when you are tired. In keeping with my grand tradition, I am sharing some photos. And seeing as it’s fall, the photos are of leaves.

I do love the fall, and seeing the spectacular show put on by the foliage. Even after they’ve fallen, a lot of leaves still catch my eye. 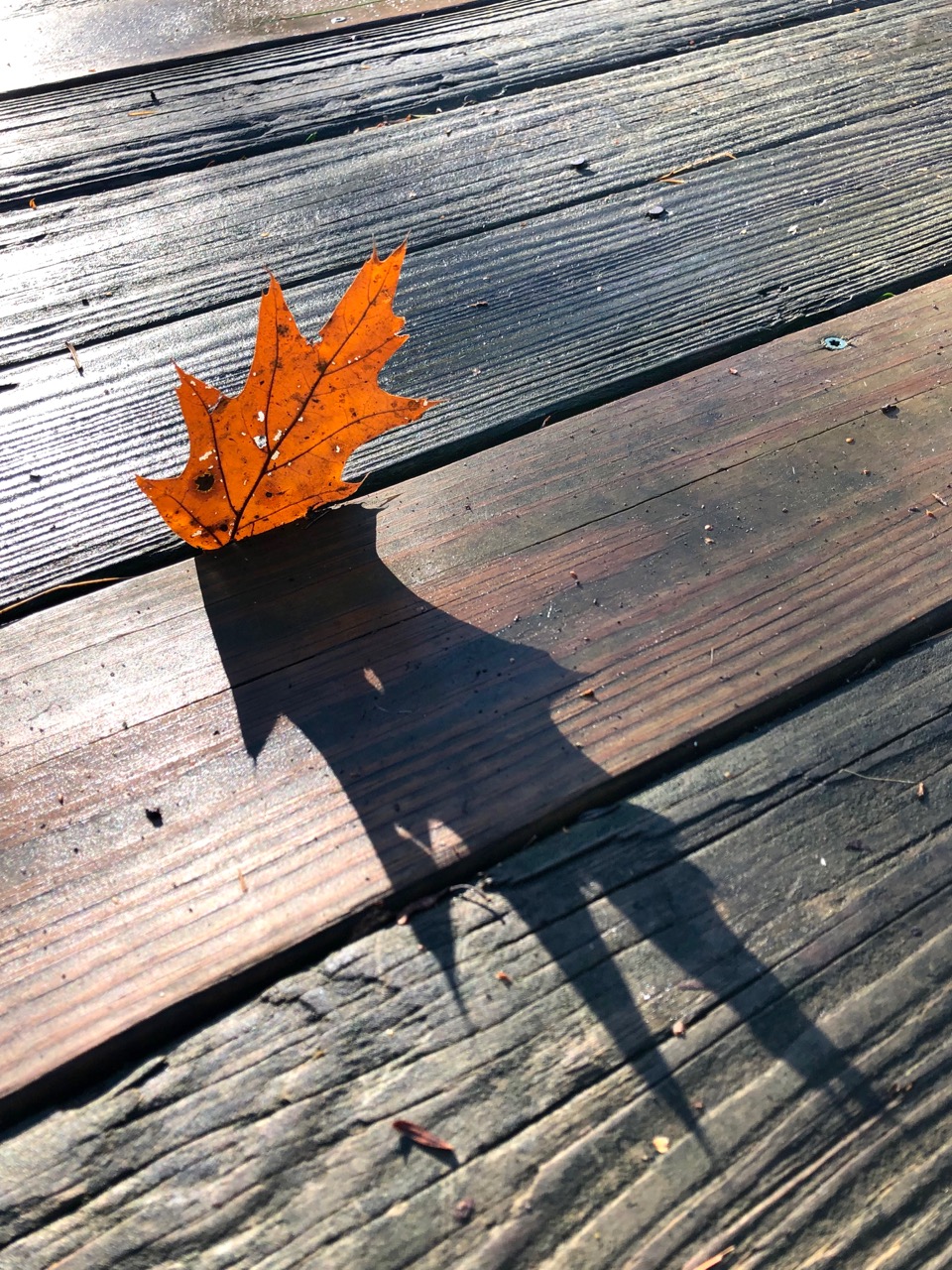 A little over a week ago, a single leaf caught my eye out on the deck. It was caught between the boards, and casting a long dramatic shadow in the morning light.

Yesterday, a similar-looking leaf caught my eye casting a shadow, this time in the afternoon light. Looking at the two photos, I’ve decided that it was actually the same leaf. It’s moved a bit, and flipped around, but it appears to have all the same markings. It seems to have blown out of the spot where it was trapped, only to get caught again.

It seems I’m not quite ready to leave November behind. Both the leaves, and the daily posting. I’m hoping to settle into some sort of moderate frequency for posting, perhaps something like once or twice a week. Somehow, though, if I’m not all in, I tend to be all out. Here’s hoping I can break that trend.

Some leaves just haven’t gotten the memo that it’s time to let go.

These are the same trees I posted about 3 years ago. That year, the leaves turned bright red, before being tossed down like a red carpet overnight in a rain storm. This year, the leaves have been continuing to cling. Most are pretty shrivelled, some have lost most of their color. But in the angled morning light, I liked the way their mottled coloration looked like watercolor. 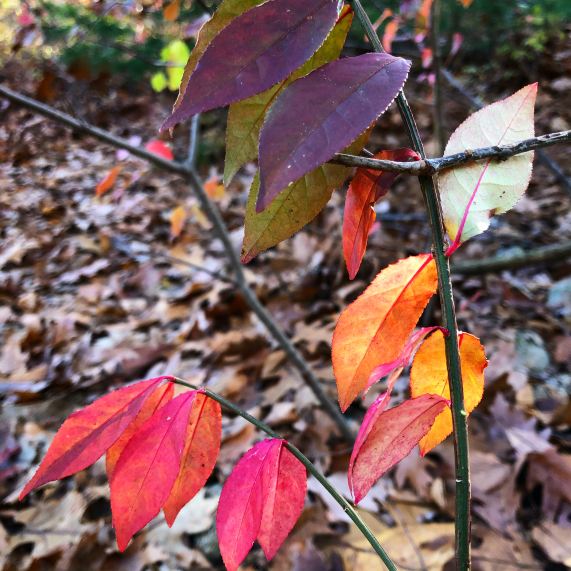 The curtains have closed on the fall production put on by the big trees, but some of the smaller ones decided to put on their own show. Whoever was in charge of wardrobe design for this production sure picked some striking color combinations. I was also impressed by the lighting, which really brought out some of the technical details of the sets and choreography. I can’t wait to see what they can pull off next season.

We woke up to a bit of frost outside this morning.  As I started my walk with the dog, a number of leaves caught my eye, sparkling in the sunlight. I’ve found it hard to capture subtle sparkling with my iPhone camera (at least without spending more time playing with apps than the dog is comfortable waiting) so I can’t share share the sparkle. I did also appreciate the way in which many of the leaves on the ground were delicately outlined in white frost, giving them the appearance of an illustration.

I took a few photos of these frosty leaves as we started the walk, but as it was a bright sunny morning, the frost didn’t last long. 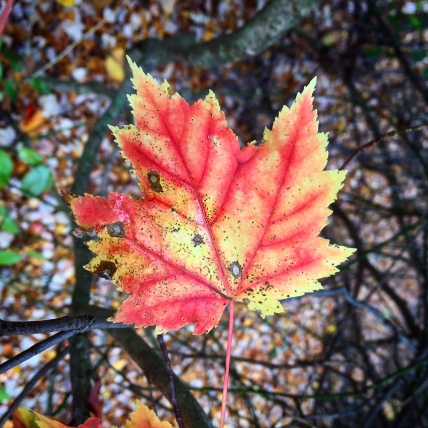 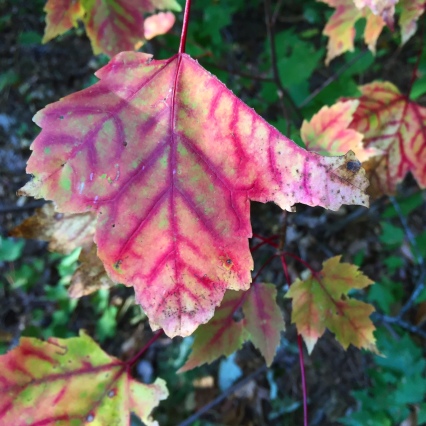 When it’s after 11, and you really need to get to sleep, you struggle to come up with what to post for your daily post. You’ve toyed around with all kinds of post ideas during the day, but then you’ve run out of both time and energy. Ultimately, you decide once more to post a bunch of photos of leaves. In this case the leaves in the photos had all caught your eye for their striking pattern of lines, with veins contrasting with the body of the leaf. And also in this case you are really me. And both you and I should really get to sleep.

I did promise leaf photos. Here are several leaves that caught my eye for their variety of color and pattern. 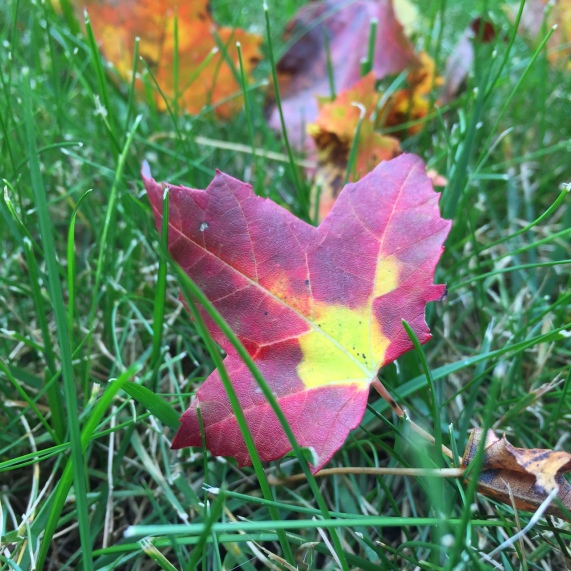 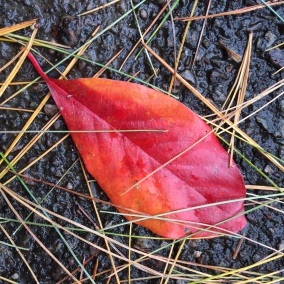 In my part of New England, this fall has been a strange one, foliage-wise. Well, weather-wise, which affects the foliage. First, the cool weather of fall was late to kick in, and we only had our fist chilly nights pretty late into October, which meant that most of the leaves stayed green up to that point. When those cold nights hit, we had a sudden dramatic change to the warm side of the spectrum. Then we were hit by a big storm a couple of weeks later, with high winds that pretty well cleared the trees of leaves. As one friend put it, we had a “pop and drop” foliage season. 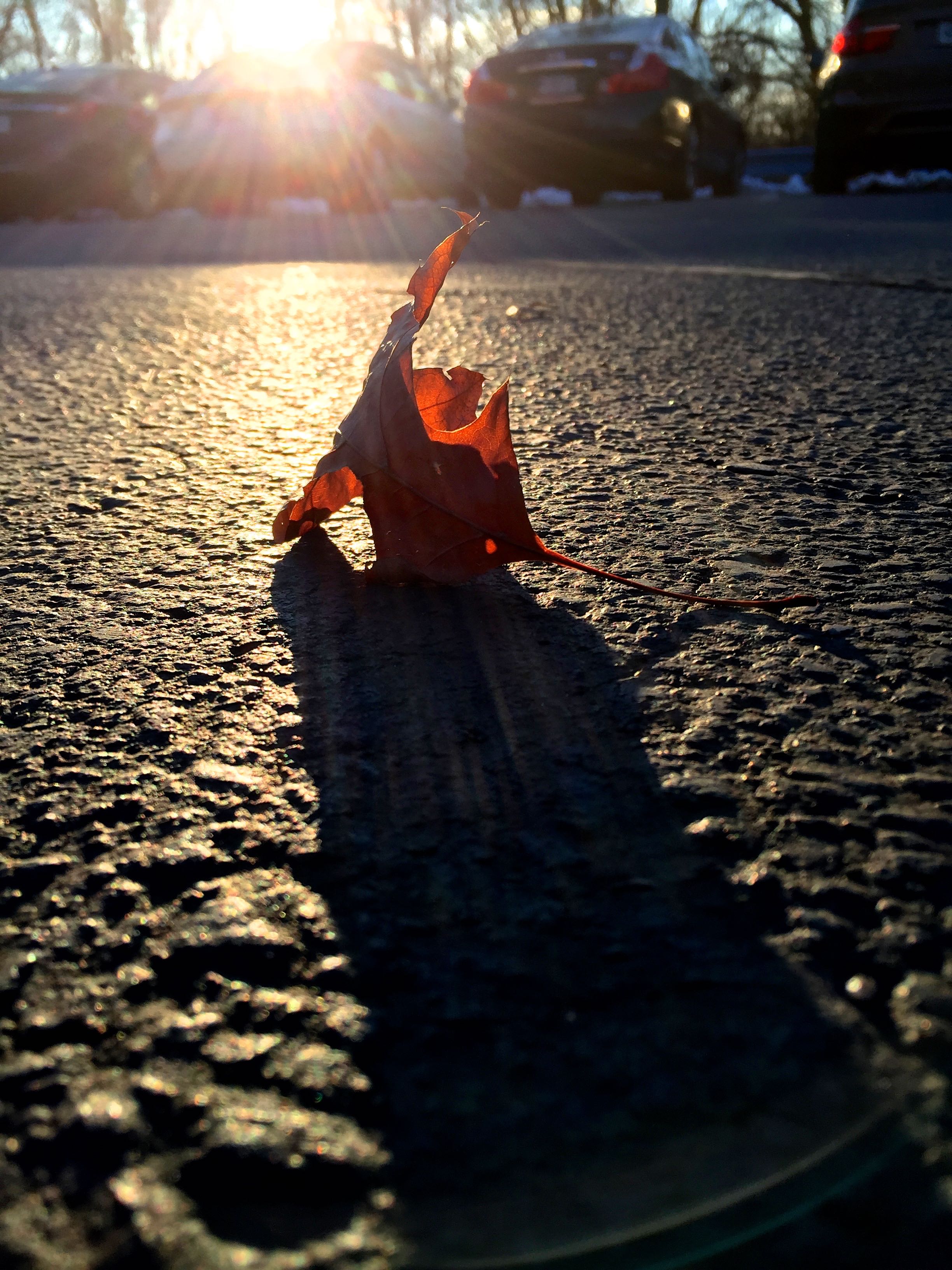 This weekend was largely uneventful, but somehow also neither productive nor relaxing. I think what I need to do now is just curl up and go to sleep. (But I’m still posting something. This curled up little leaf caught my eye a few days ago, catching some late afternoon rays in a parkling lot.) 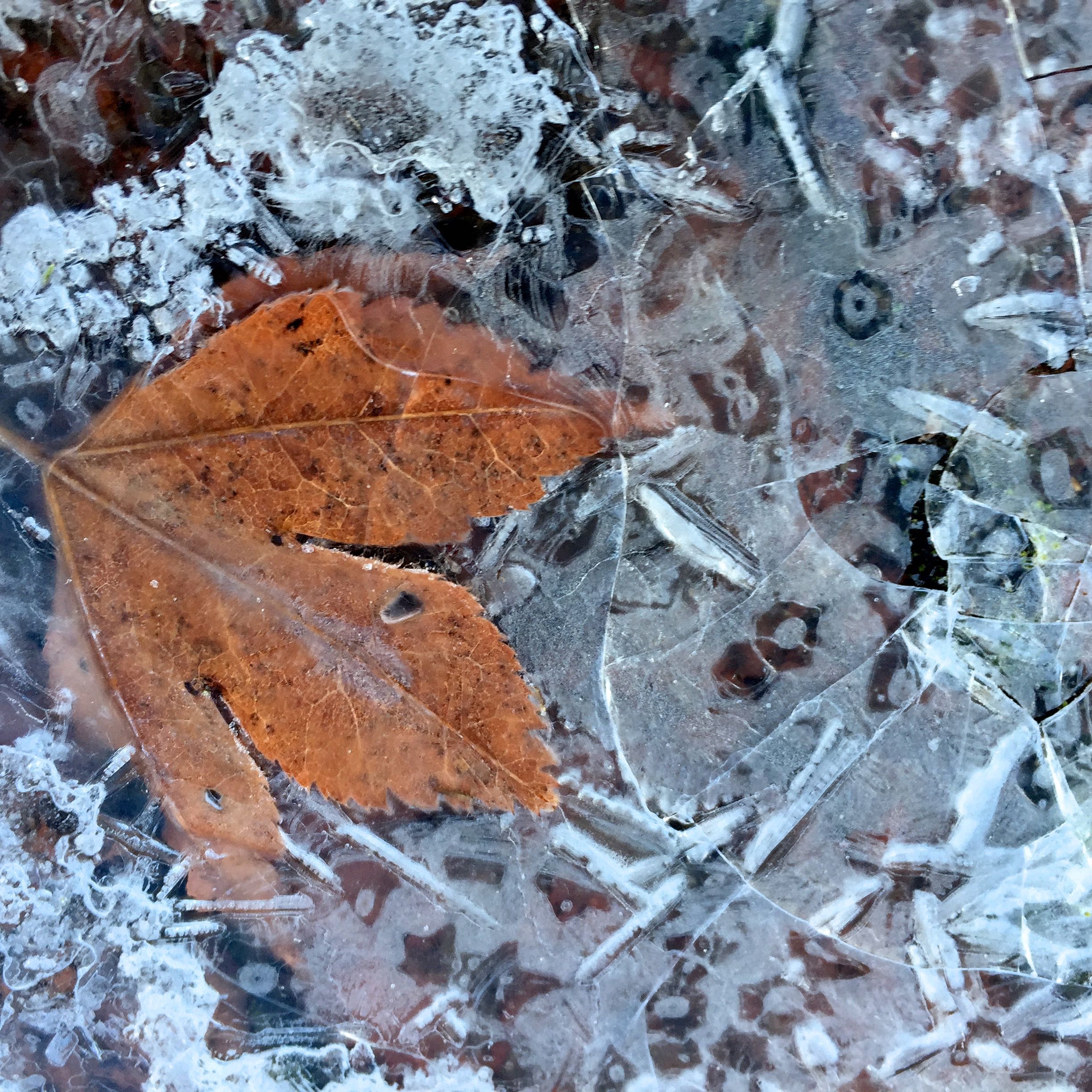 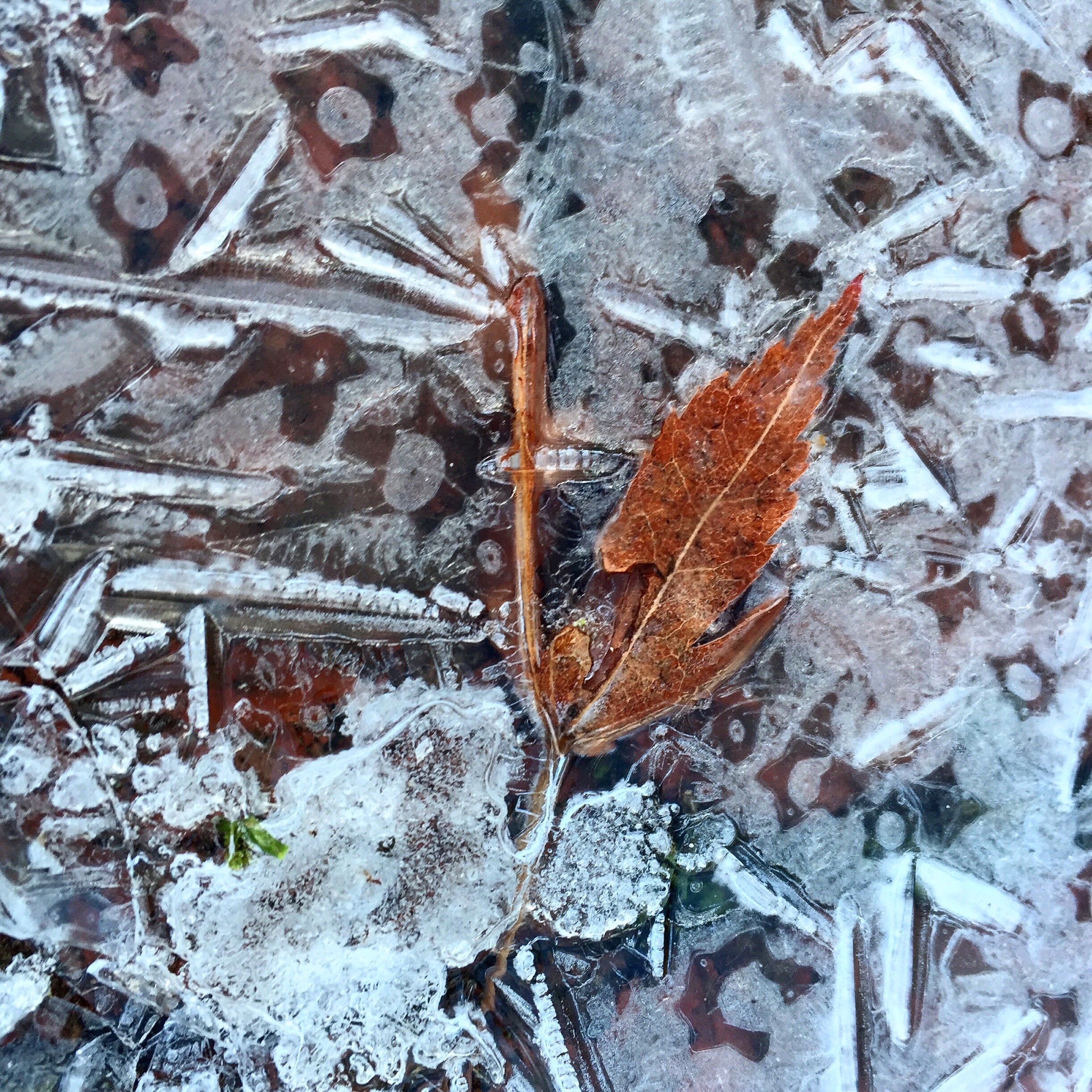 It may not shock you to know that in this transition from late fall into winter, I sometimes also take photos of leaves and ice together.