On my trip to Hong Kong last August, the morning of the start of the conference, a group of attendees and I arrived at the conference venue in search of breakfast. Winding up in a little cafe in the sprawling convention center, we purchased a variety of baked goods and hot beverages. A colleague of mine also bought a container of mixed fruit slices. Mingled among the identifiable slices of melon and pineapple were a couple of rectangular white slabs, speckled throughout with little black dots. My colleague was kind enough to share her fruit, doling out slivers of the mysterious thing to the half dozen of us sharing the table. I had a little nibble, and found it to be pleasant: quite soft, a bit like a cross between a cantelope and a watermelon in texture, and with a bit of crunch from the seeds. Perhaps it was the presence seeds, but the taste reminded me a bit of kiwi, but much milder. Someone at the table was able to suggest that the fruit was a dragonfruit. I had no idea what such a thing was, or would look like outside of a container of mixed fruit slices. (But I did have a strong suspicion that it didn’t grow in rectangular slabs.)

A couple of days later found me on a fairly cringeworthy bus tour, which in retrospect did get me some good photos and a few stories to tell. It also landed me in front of a fruit stall, where (among other fruit options) there was a big stack of brightly colored dragonfruits (identified to me by my tour companion). I bought one.

While I intended to eat it, I admired it primarily for its looks. Here are a couple of photos of it as it posed while waiting for the cringeworthy bus. (Actually the tour bus wasn’t the problem. The tour guide was.) 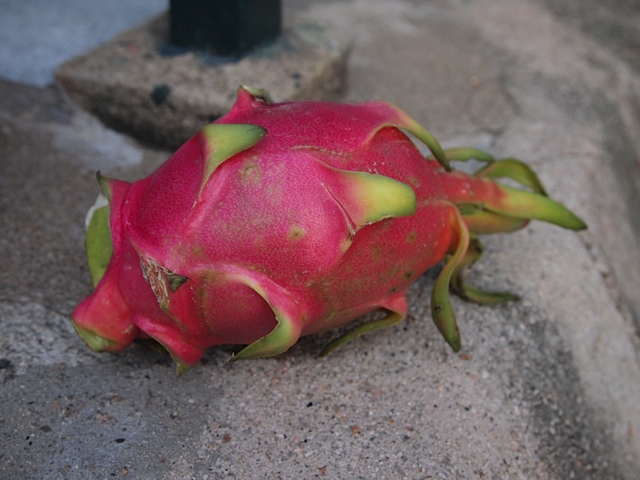 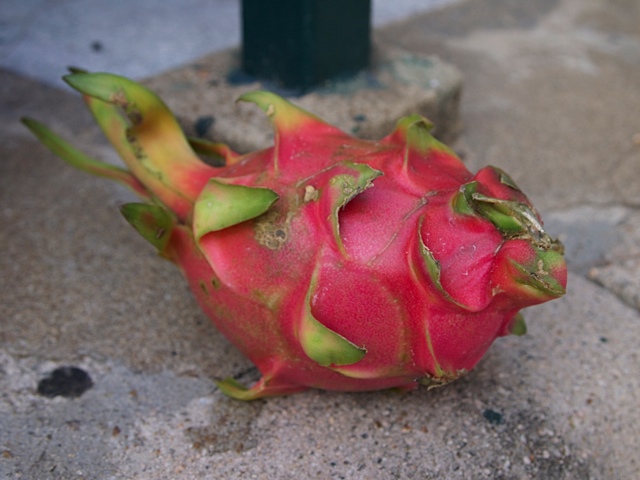 It wasn’t until a couple more days had passed that I had a chance to try it. Here it is, back in my hotel room, sitting on a hotel towel. In spite of its resemblance to dragon scales, I found that the skin to be surprisingly easy to cut with the dull standard plastic knife I had. 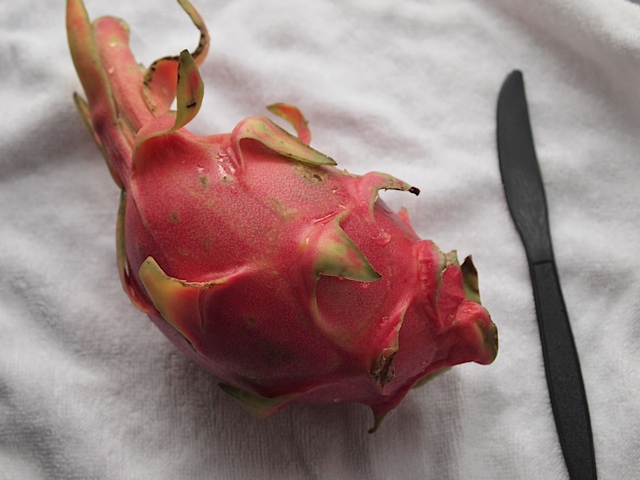 It sliced up easily, revealing the the flesh inside with its speckling of black seeds. (I hadn’t been sure yet whether I’d gotten the same kind, as there is also a variety with red flesh inside, and a similar-looking outside.)

I seem to recall that the skin slipped off the fruit easily, but I have no supporting photographic evidence. I didn’t eat the skin, in any case. (I don’t actually know whether one can or should, but I have the impression that people don’t.)

(Sadly, this particular dragonfruit was more photogenic than it was tasty. It didn’t have even the hint of the kiwi-like tartness of the earlier fruit I’d sampled. In fact, it didn’t have much flavor at all.)

11 thoughts on “Enter the Dragonfruit”