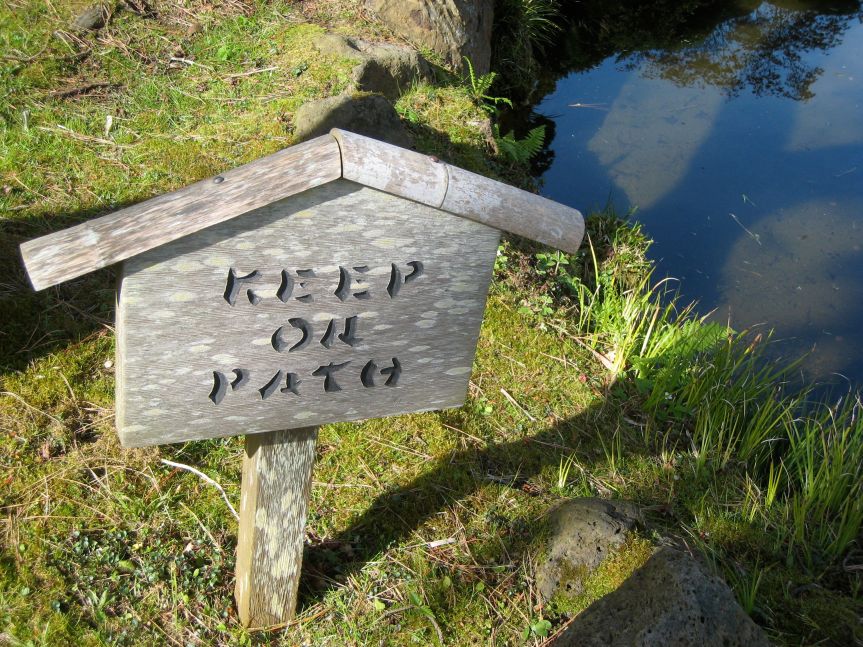 This sign seems to offer helpful advice, but sometimes I’ve found myself with doubts I’m on the right path.

There is also something to be said for being a trailblazer, and heading off the path. You do need to watch out for hazards like poison ivy, though. Or other pitfalls. There might even be actual pitfalls! I’ve never seen a pitfall, other than in movies or TV shows I saw as a kid. It might actually be cool to build a pitfall, but if you did so, you should probably not do it on the path. For one thing, you’d probably get noticed by others who are out on walks on the path, and they might get suspicious of you out there with your shovel. You did bring a shovel, right? Because you’re not going to make a very effective pitfall if you just try digging a hole with your hands or a stick. Or even a spoon. It would take you a really long time with a spoon. Unless it’s a really big spoon, and unless the ground is really loose. So that’s another reason to go off the path. The ground’s going to be really packed hard on the path, and even if you had half a dozen friends there to help you with their grapefruit spoons, it would take a long time to build a pitfall big enough to catch something. No, I don’t know what you’re likely to catch. If this were a bikepath, you could catch a biker, but we already decided you should go off the path for this. So maybe a raccoon? Because, let’s face it, you’re going to get pretty tired of digging that pitfall, and I doubt you’ll keep at it long enough to make a hole big enough to catch something big like a bear. What were you planning to do with a bear anyhow? So just plan to keep things small and simple. A little hole, covered up with some sticks and camouflaged with some leaves. But not those leaves! I’m pretty sure those are poison ivy.

Come to think of it, it’s safer to keep on the path.

Better yet, keep on the couch and put on an episode of Gilligan’s Island. I’m pretty sure there was an episode where someone tried to make a pitfall.