In the US, the 4th of July (aka Independence Day) is traditionally celebrated with (among other things¹) displays of fireworks. We took the kids to see some fireworks a couple of years ago at a nearby town, and this year we went to a school field at a different nearby town. (Our own town doesn’t host any such displays.) Both times, I enjoyed the challenge of trying to capture the fireworks in photos. I’ve learned a bit more about how to use my camera² in the past 2 years, so I think I had a higher success to failure ratio this time around. (So funny to realize that July of 2010 was before I embarked on my daily photography adventure for project 365.)

As best I can tell, it helps to have a camera that you can set to full manual mode: you’ll want to set the aperture, shutter speed and ISO levels, and also not try to rely on auto focus. (Things typically move too fast with fireworks for my camera to find a focus on its own.) I played around quite a bit with the settings, and took probably well over a hundred photos, to get some shots that I liked. (Two of the great things about digital photography are the cheapness of taking so many exposures, and the near-live feedback about how your photos have worked out, letting you make adjustments accordingly.)

Here are a few of my favorite shots. 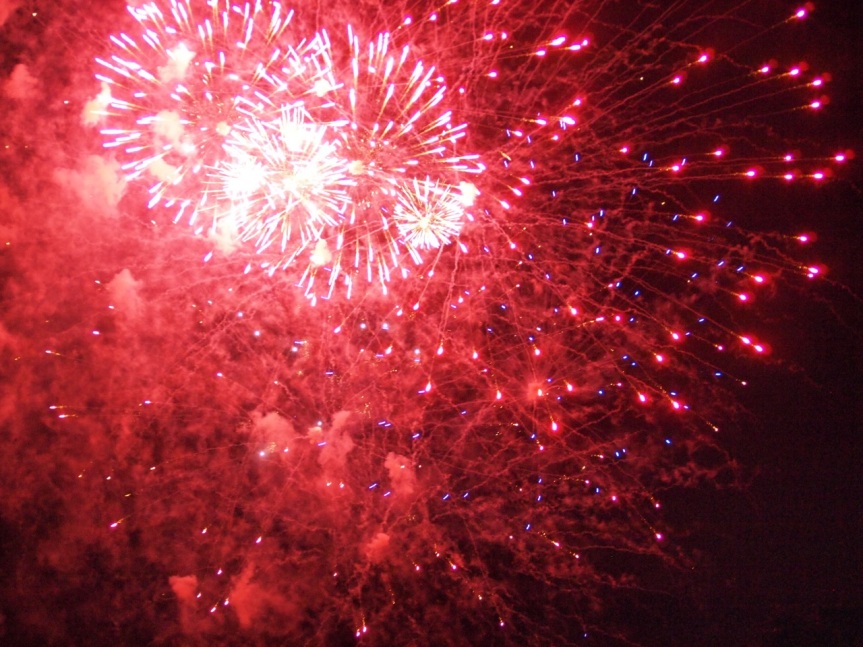 Next I switched over to my 20 mm fixed-length lens, which can open to a really wide aperture. It looks like I stuck around an aperture of f/1.8, set the iso down to 400, and then a shutter speed of 1/10 (a tenth of a second).

This is one of my favorites, as it reminds me of a dandelion gone to seed. 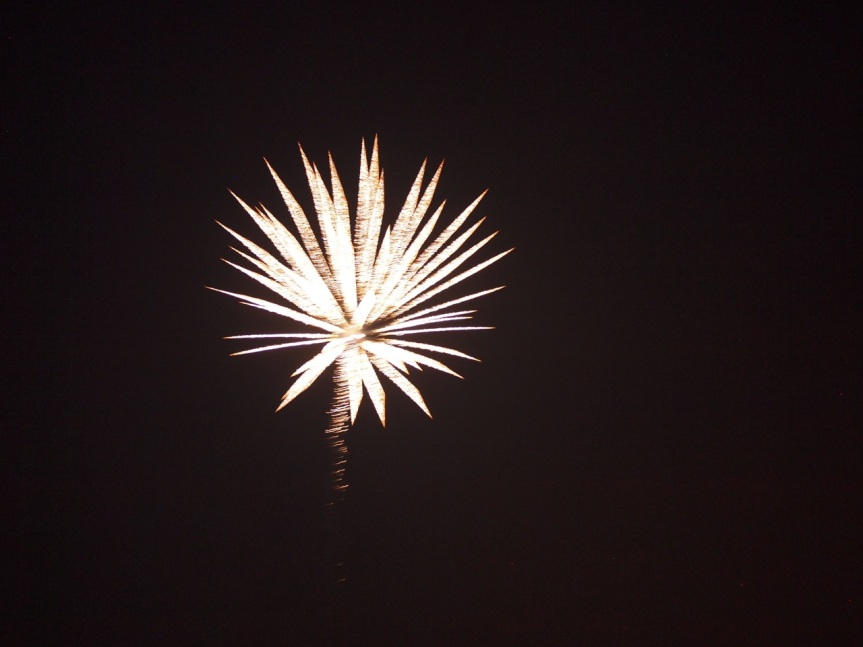 This was taken at a lower shutter speed (1/2, or a half second), and the added blur gave the effect of shards of ice crystals. 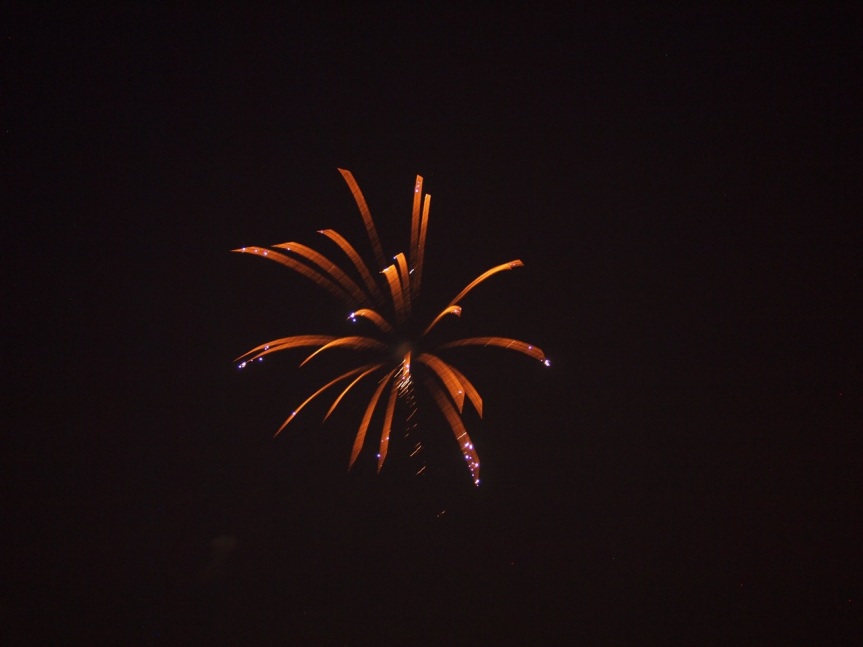 This was another slow one, and it reminds me of ribbon. 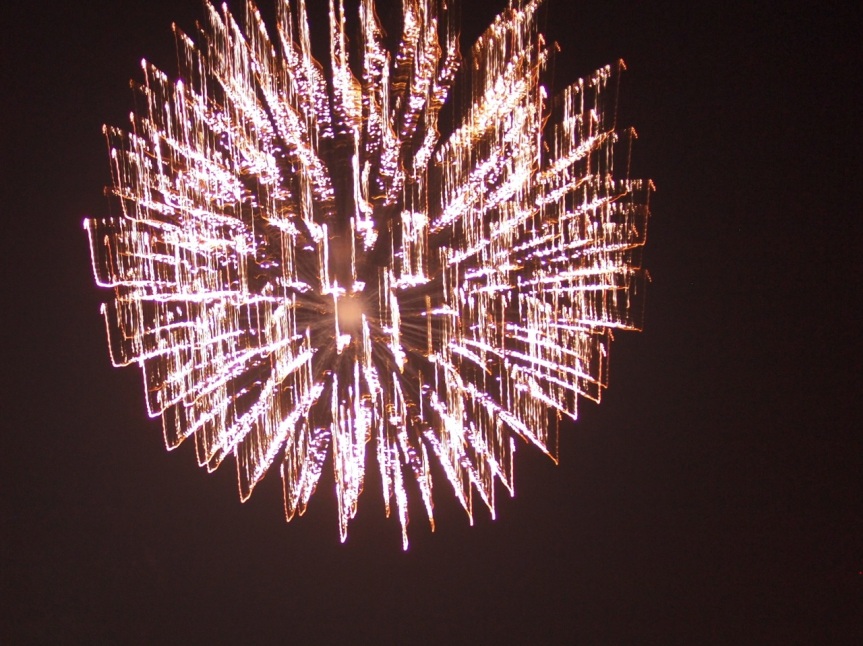 This upward-dripping effect may have been due to me playing around with moving the camera as I took the shot. (I do remember intentionally moving the camera for some shots, but don’t remember whether this was one of them. It’s also possible that somebody bumped me. Or maybe I sneezed.)

Many of the colors didn’t come out for me, except when a single color dominated. I liked the way this one, while sparse as the blooms went, showed a wide range of intense colors. 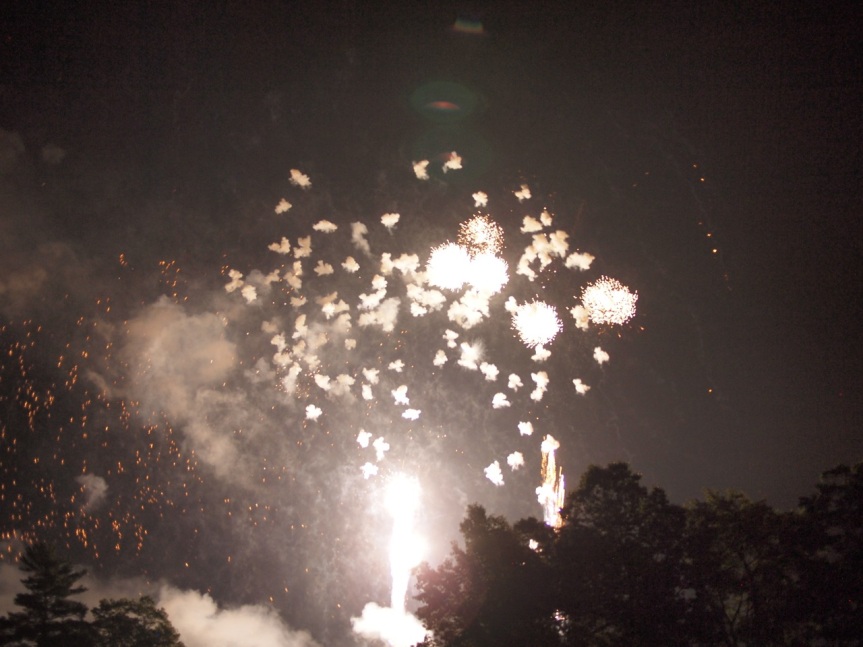 I love all the shapes formed by the puffs of smoke in this one. I see butterflies and flowers and ducks. Also a few blobs of oatmeal.

Here’s an early one from the show, where I was still trying to work out the focus. Clearly, I missed, but I like the result anyhow. 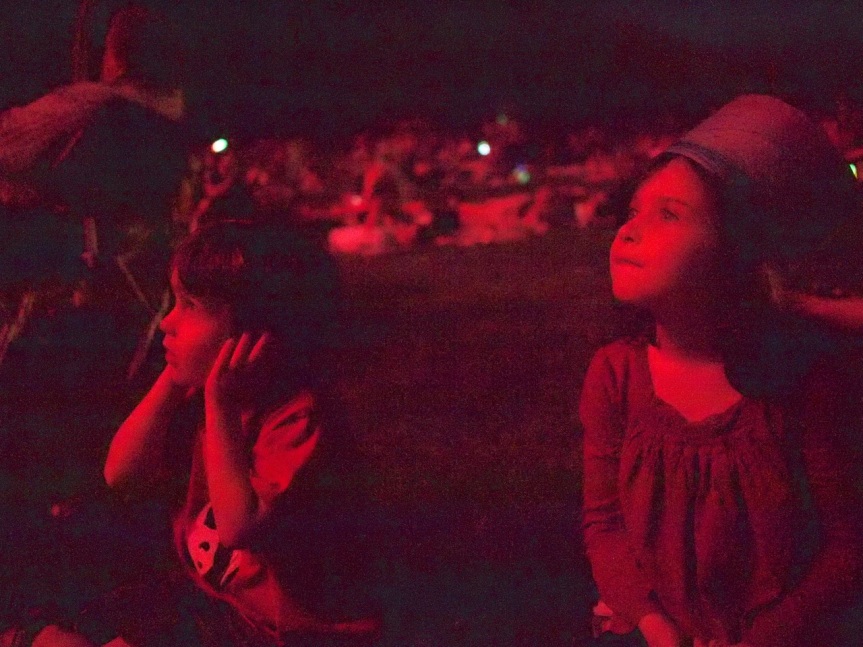 Theo was quite scared by the fireworks 2 years ago, or at least by the loud noises. (He did like the pretty lights.) This year, he only half-heartedly covered his ears. Phoebe was fully entranced. (Here I had to crank the ISO way up to 1600 to see anything. The red glow is likely from some red fireworks–the only light I had in this shot.)

I have a few more shots in the slideshow below in case you are compelled to see more. Click on the photos above to see them bigger.

And in case you are wondering why I’m now posting 6-month old photos, it’s to participate in …um… last week’s³ friday foto finder with the theme of “fireworks.” (The photos would have been exactly 6 months old if I’d managed to post on Friday!)

To see what fireworks people were celebrating, go check out the friday foto finder blog. And if you’d like to participate this Friday, the theme will chocolate.

¹ Also hot dogs, potato salad and flag-waving.
² An Olympus Pen E-P1, which I have been known to refer to as “my epi-pen.”
³ It was a hectic week, and the last few days were a crunch of presentation preparation followed by a bit of conference attending. This time without traveling.