Snow plows at the ready at Boston Logan airport.

I’m rather in denial that it is now December, but I can only ignore the evidence for so long. This weekend, we went to 2 different towns’ tree lighting ceremonies, and tomorrow we go to a local tree farm to get our own tree. There isn’t any snow in the immediate forecast, but it will come. (And really, this reminds me that I should probably scoop up and toss what remains of the pumpkins that are currently rotting on our front porch.)

This was a tree that caught my eye, on the edge of the Boston Common. It led to me having various flights of fancy, including imagining that the brickwork was a last resort following the willful disregard of requests to birds not to set up their homes in the tree’s hole. (I like to think that the tree once boasted a “no trespassing” sign like the one in this older photo I took of a tree somewhere in my town.)

Here is a selection of some photos I took on Sunday on my excursion into Boston. I wasn’t looking for patterns, but apparently they found me.

Steps off the Common. 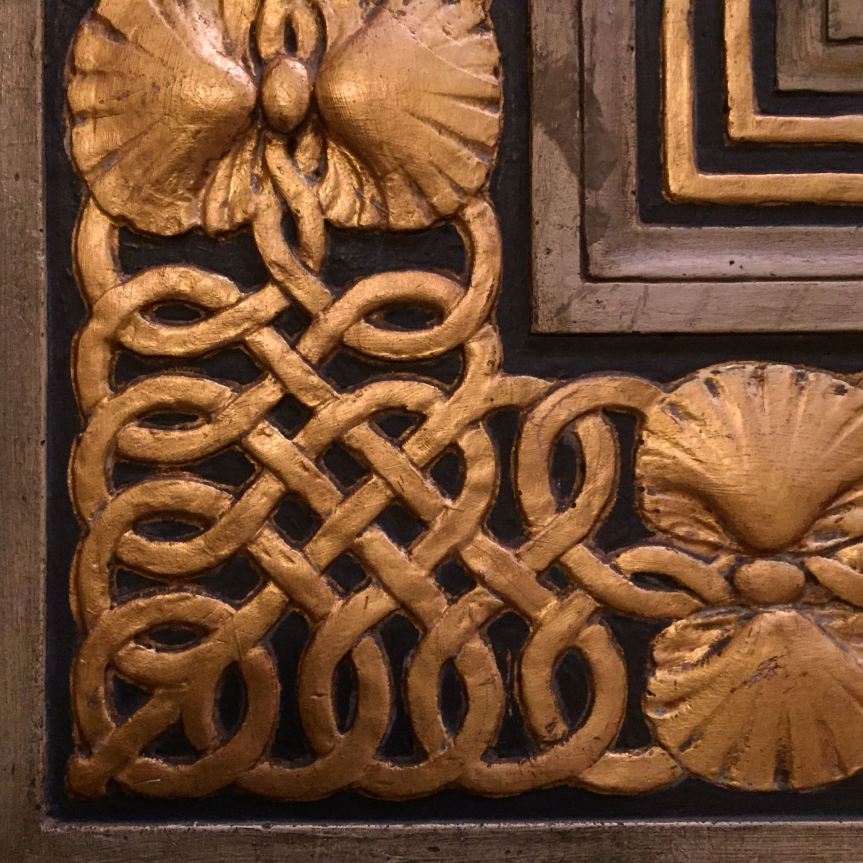 Fire escape on a building near the Common.

Headstones at the Granary Burial Ground 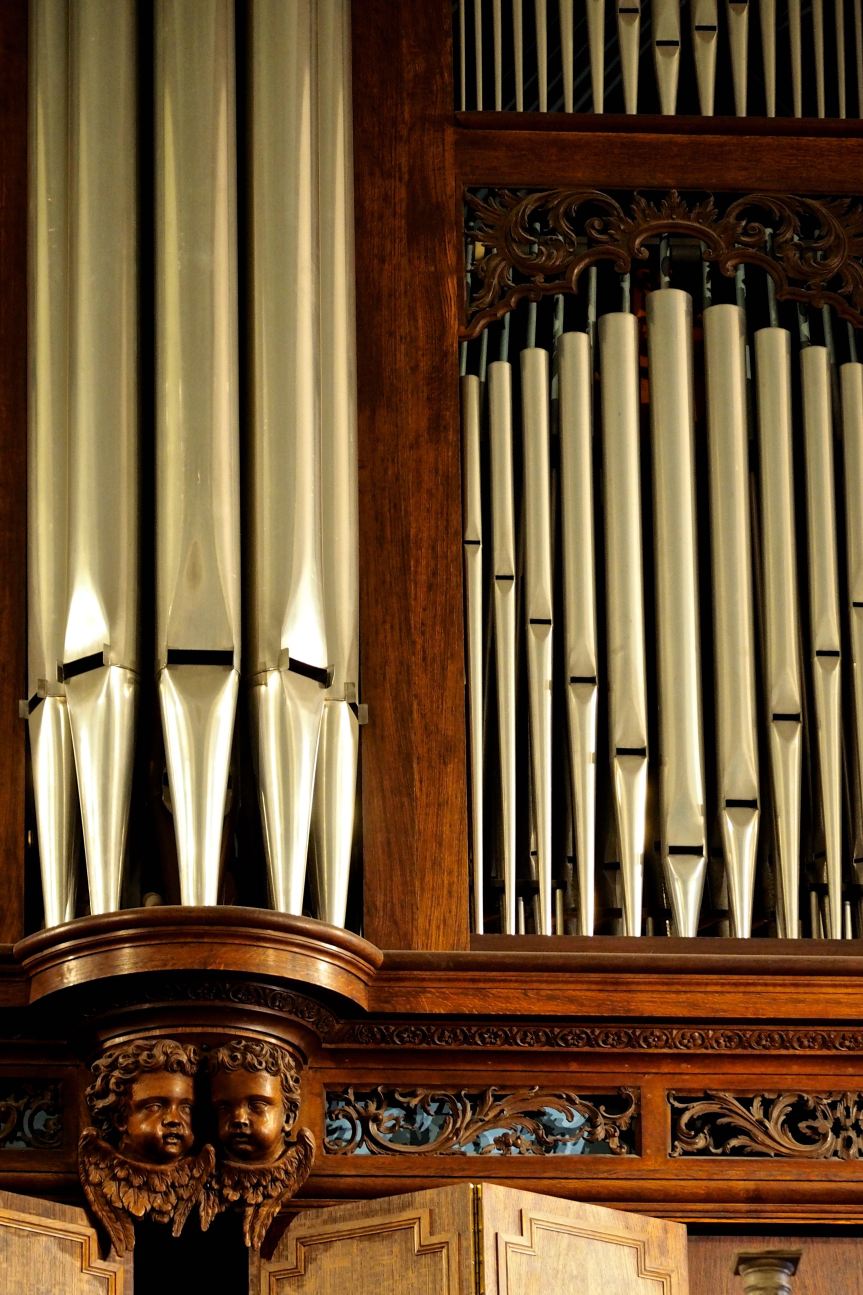 I took quite a lot of photos on my excursion into Boston yesterday. While many of them were to document historic monuments for my son’s scrapbook project, I naturally took a bunch of things that caught my eye. Something that definitely caught my attention was the flocking behavior of some pigeons. It was fascinating to watch them swoop and turn as a mass. The first flock we saw, I barely managed to get a couple of shots with my phone before the pigeons decided to perch on a rooftop. 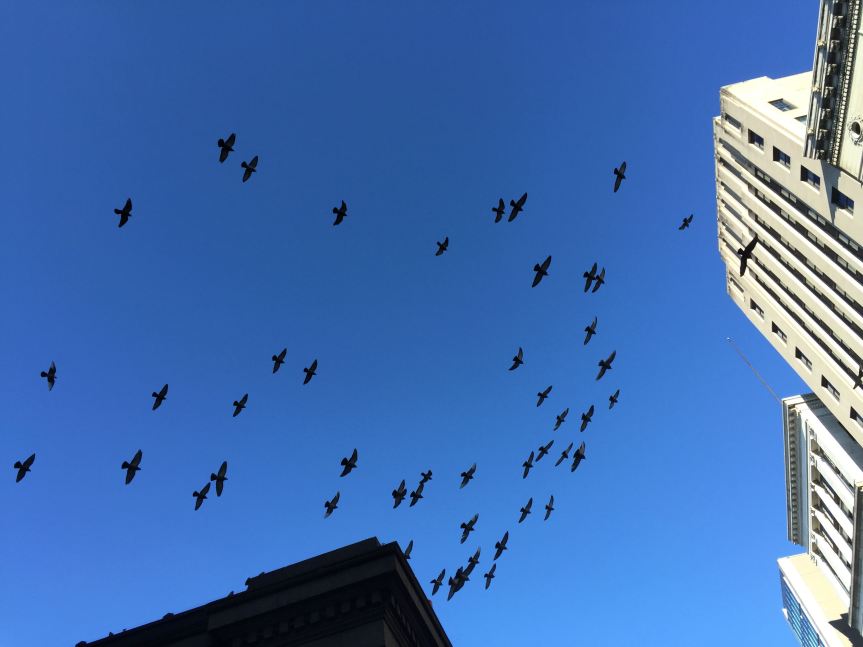 A couple of hours later, a flock caught my eye when my real camera was at the ready. 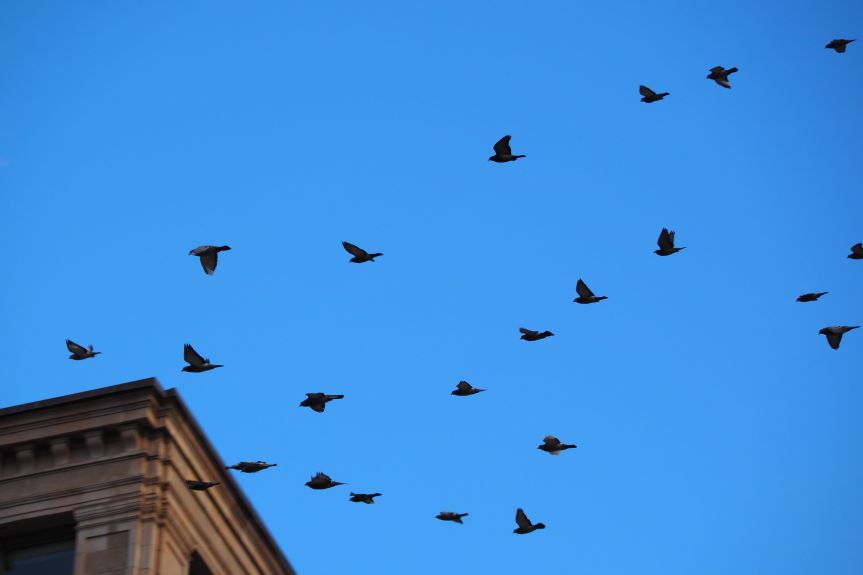 At the end of the day, I was amused to see this one little guy on the underground platform at Back Bay Station, apparently waiting for the same train we were. I can only assume that the flock was getting on his nerves, and he decided to fly solo for a bit (as it were). 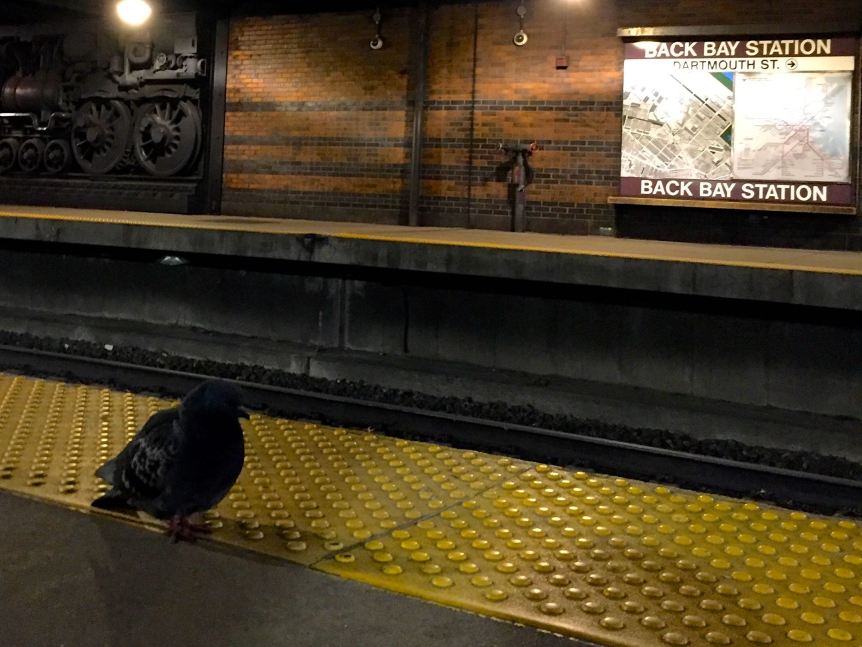 Tonight I am grateful both for having a flock to be a part of (my friends and family), but also be able to have some time alone to do my own thing.

I went on an excursion into Boston today with my mother (visiting from California) and my son. My son has a school project this year for which he is encouraged to visit various historic and culturally significant sites in Massachusetts. We went to the State House (just the outside), hit a few more landmarks on the Freedom Trail, and then headed to the Boston Public Library. Getting out of the T station at Copley, we were greeted by banners at the beautiful Old South Church proclaiming: “Love thy (Muslim) neighbor as thyself.” I was very heartened by this message of love and inclusion, what I see as an overt and beautiful response to the islamophobia that is running rampant among many in this country. (And which is sickeningly encouraged by the President-elect.) 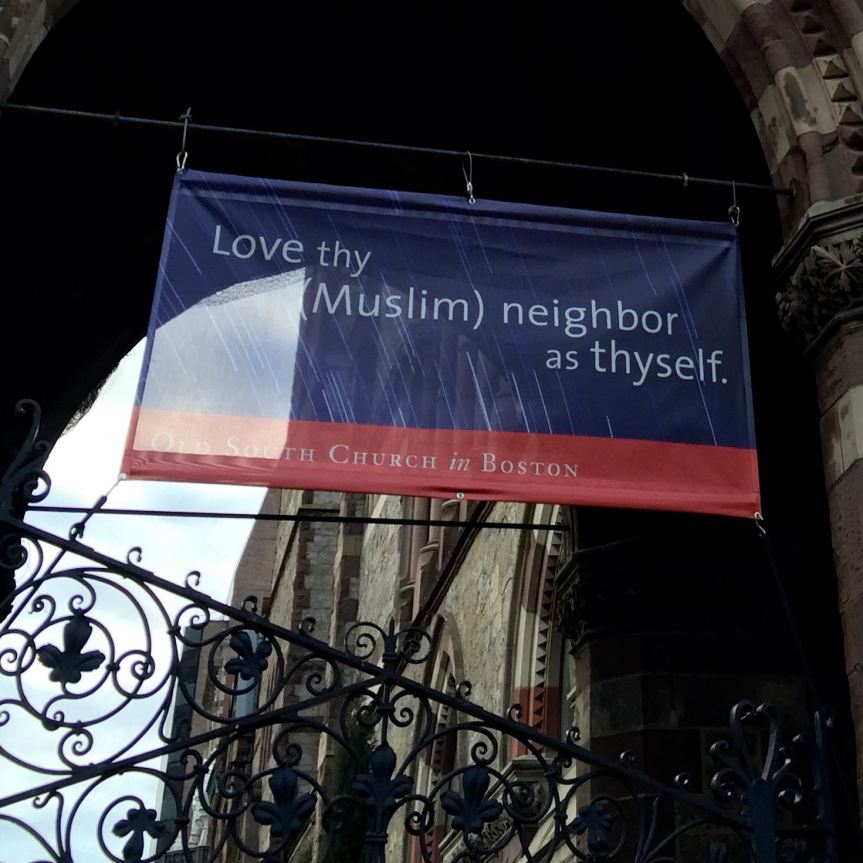 I have been running behind in my enumeration of gratitude, which I had intended to post here daily this month. However, tonight, it is easy for me to say that I am immensely grateful to live in Massachusetts: a state not only rich in history, but which has frequently shown itself to be on the right side of history. While not everyone in the state feels the same way I do, Massachusetts voters by and large choose social progress. And there are many, many people in Massachusetts speaking out loudly for these ideals.

Here are a few more photos I took on our visit to the Boston Public Library on December 31st. It’s really quite a striking building, with lots of details small and large to admire.

A reading room with quite a few people apparently at work on New Year’s Eve. I love the table lamps here, with their green glass shades. 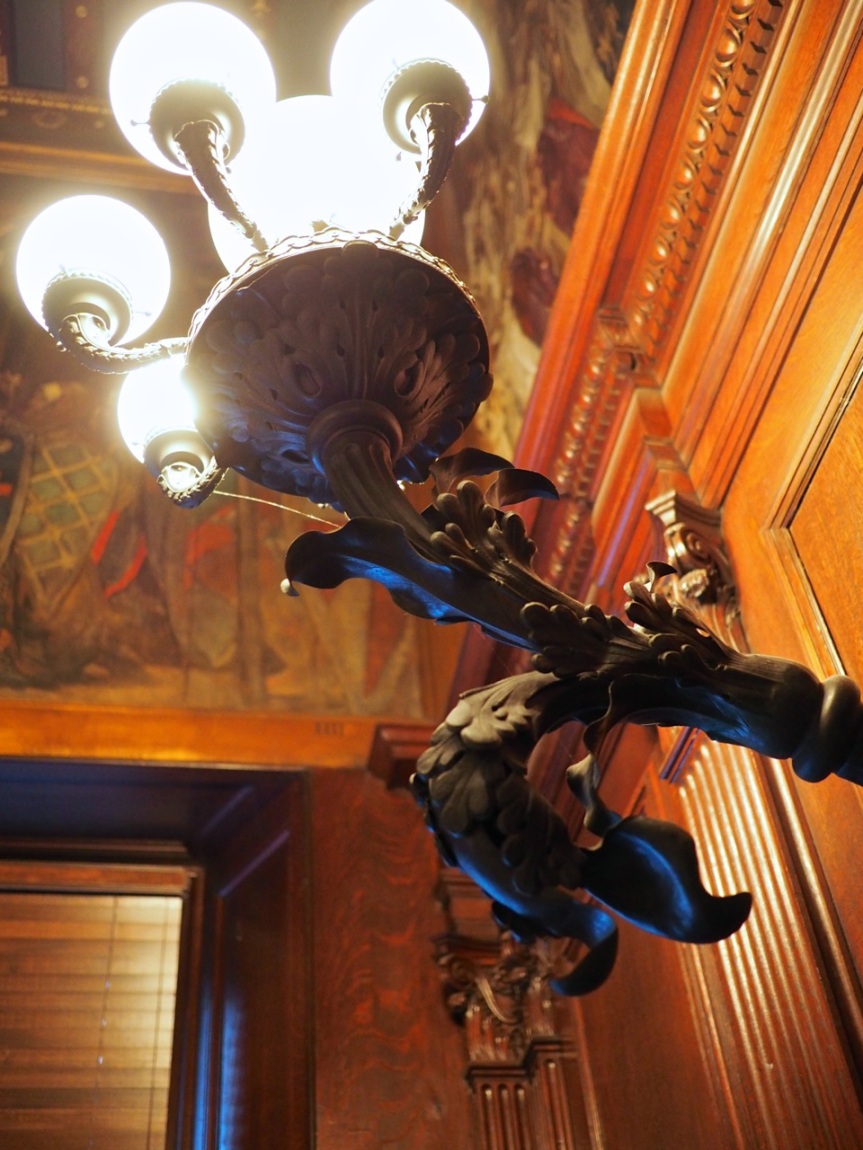 Here is another light fixture that caught my eye, this time for its leafy ornamentation. 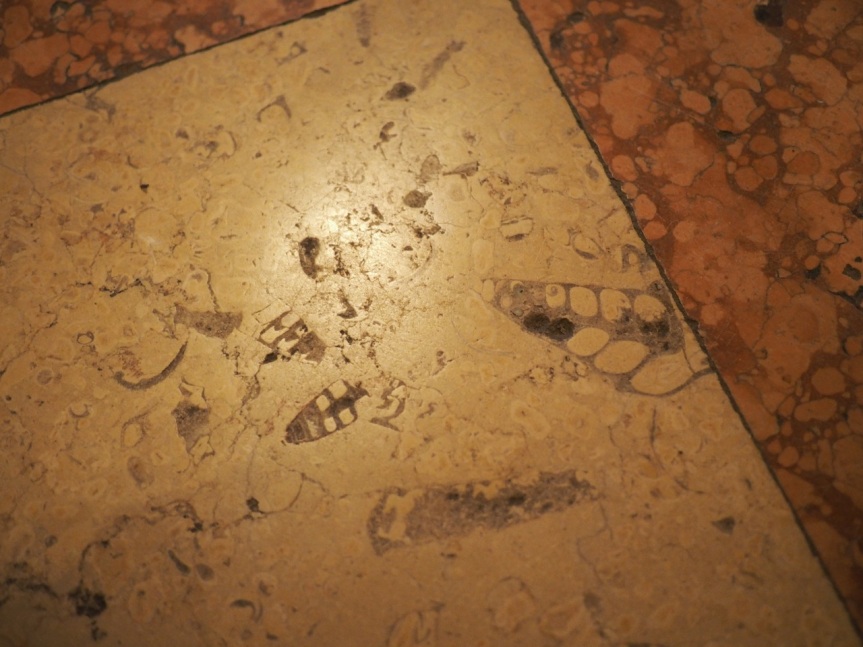 There are fossils to be seen in the stone of the floors. 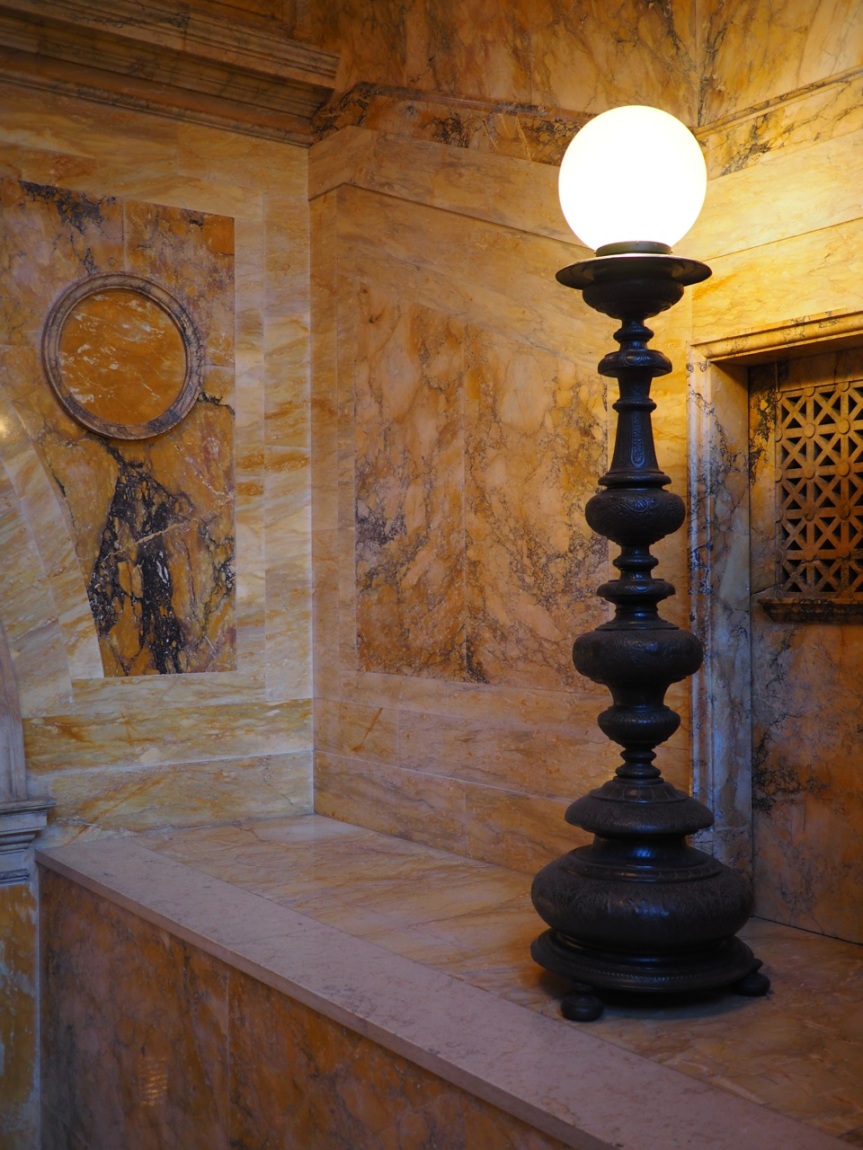 I loved this little corner with the lamp with the spherical shade, and the circle of marble in the wall echoing its shape. 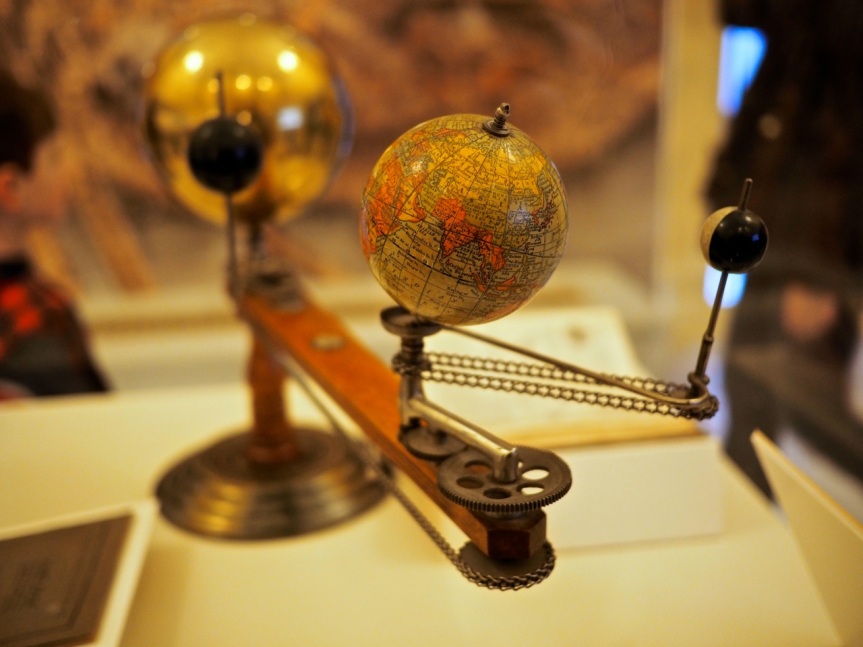 This delightful mechanical model of the earth is on display in the map room.

The courtyard is lined with stately columns and arches, which can be glimpsed through this door. 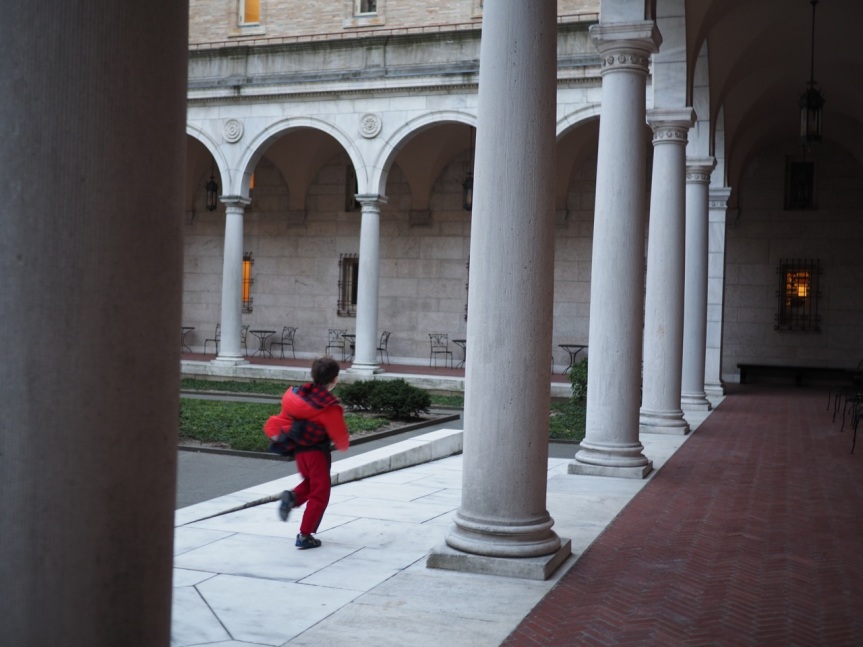 The courtyard is a wonderful place to get some fresh air and stretch your legs after being dragged around a large building with a mother who likes to take pictures of light fixtures and spots on the floor.

I guess that it’s probably time I set aside the ducks, at least for the time being. Yesterday’s imposing duck and stone lion statuary from Beijing made me think of some other regal stone lions. 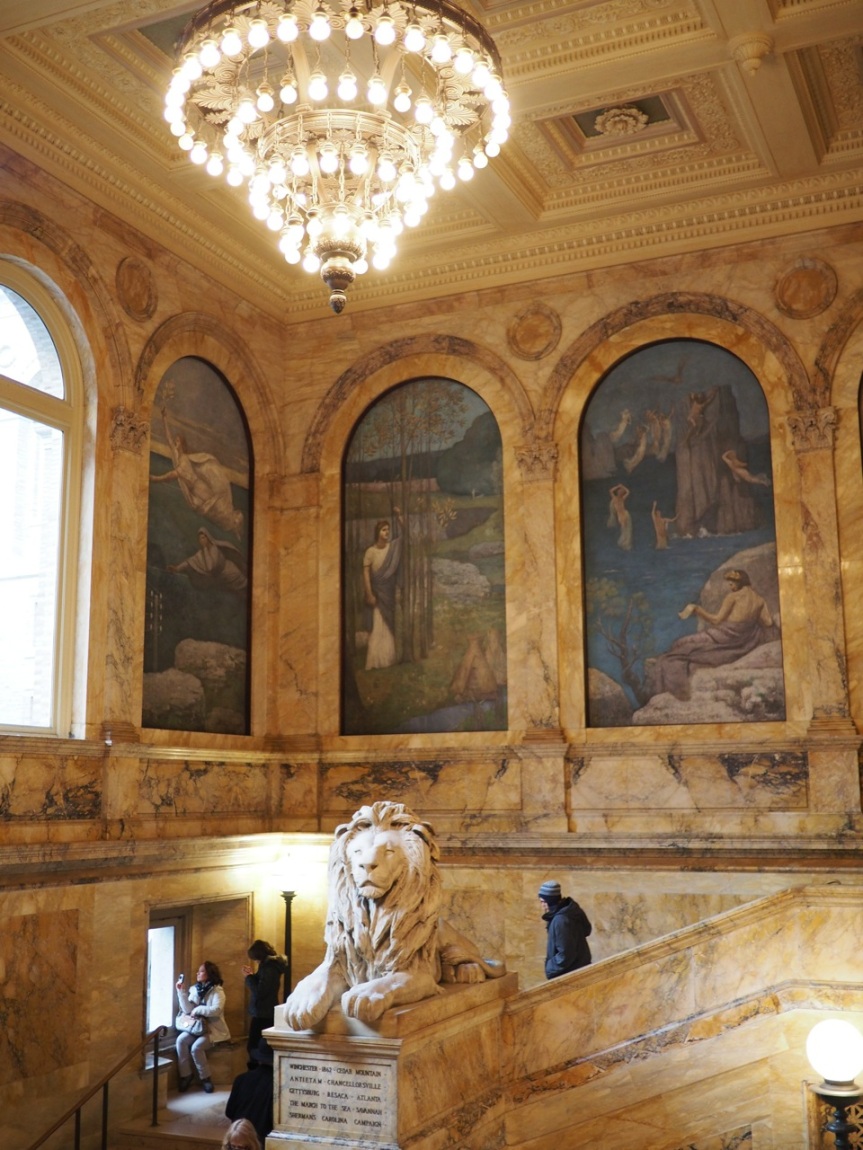 I’m quite fond of the large stone lions that guard the stairs inside the Boston Public Library.

We paid them a visit on New Year’s Eve, and wondered around the library a bit. I hadn’t remembered previously encountering this statue of a little girl and a goose. I can’t really tell whether she is supposed to be feeding the goose grapes, or trying to keep them away from the goose. Actually, I suppose it could be a swan. 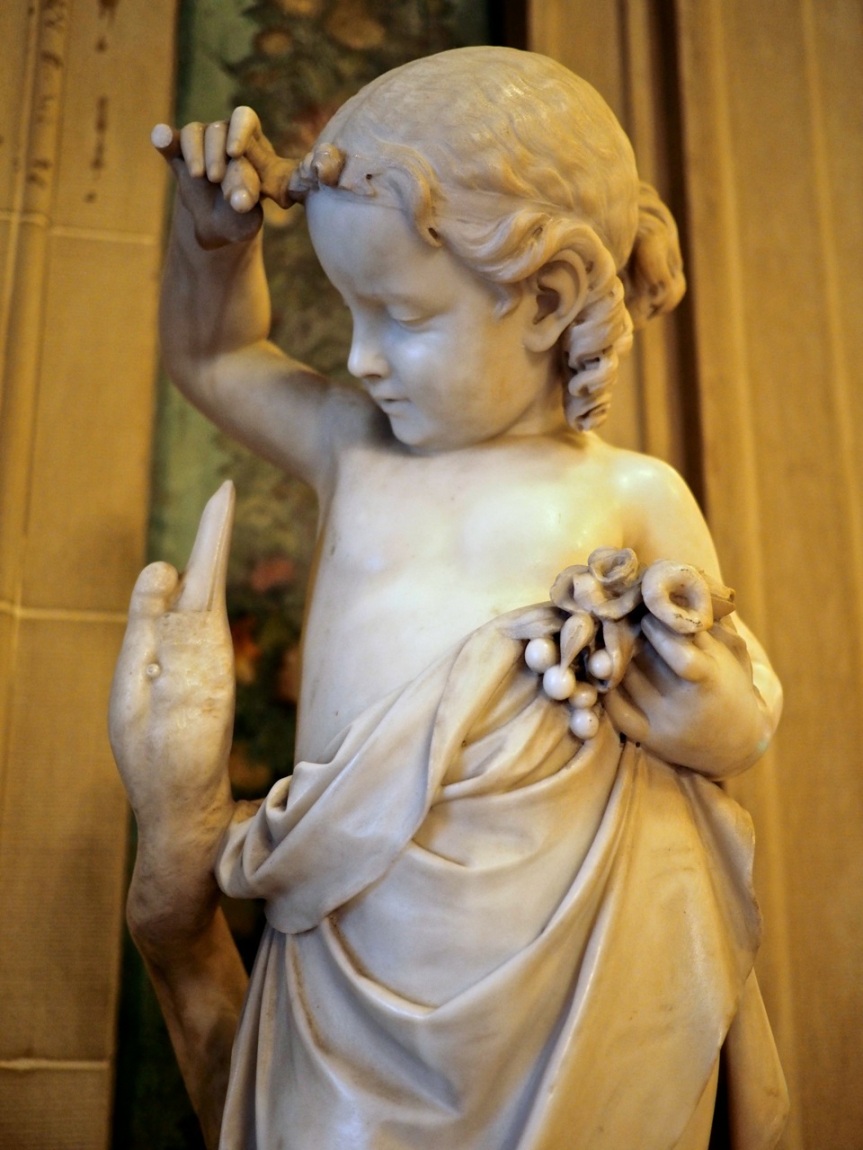 I admit that what made me think to post these photos was coming across this photo of the statue’s feet. (Seeing the webbed foot reminded me of ducks.)

I commuted into Boston again today, for a long day of running subjects on a bunch of different experiments. We are trying to get as much data as we can before a couple of upcoming conference deadlines, and also before our subject pool leaves town for winter break for a month.

I haven’t been taking many photos of late, largely due to being busy and often rushing around. This morning, I arrived and parked with enough time to get coffee from my favorite independent coffee house. On my way, my eye was caught a few times by patterns made by the very, very light dusting of snow that had fallen that morning. Most of the ground and surfaces were bare, but the the tiny dry snow flakes (more like little grains of ice-sand, really) had been blown around, and caught here and there in cracks and crevices.

I liked the way the snow filled in the cracks of these bricks in the sidewalk.

Here, I thought it was cool the way the snow had caught in some sort of fallen plant stems, which seem to have been arranged by a little whirlwind around a parking meter post.

Also seen were students attempting to have a snowball fight from the deeper piles of dusty snow that had caught along the curb. It was really not the sort of snow that you can make snowballs out of, so really people were just throwing poofy clouds of snow at each other. It was very cute. (I didn’t get any good photos. It did make me smile, though.)

Yesterday’s photo of a wake, and the sailing going on in that wake, reminded me of some photos I took several years ago. One fine spring day in 2012, I went for a walk with a good friend along a path by the Charles River in Boston. I had my camera along with me, and ended up with quite a few photos that I liked. (I’m not sure why I never got around to posting any of them. Probably due to my general hoarding tendencies.) 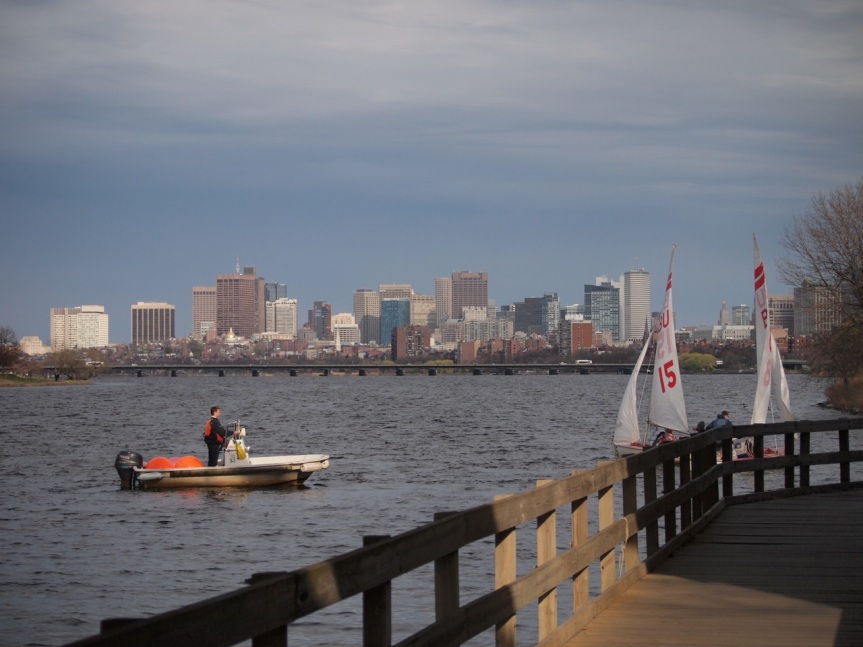