We had Thanksgiving dinner at our house this year, which has become a tradition in recent years. In addition to my family of four, plus my mother-in-law (who is in assisted living in a neighboring town), it has also become a tradition to invite a friend of mine and her two boys.  This year, we were happy to have my mother join us from California, bringing our grand total to 9.

I know that many people host big gatherings of 20 or even 40 people, which honestly sounds totally exhausting to this quiet introvert. (I’ll stick to my table for 9, thank you very much.)

While this relatively small and very comfortable gathering tends to be pretty low-key, I do go a bit crazy with the side dishes. For me, the “side” dishes are actually the main event of the meal. (My immediate family doesn’t eat turkey, and I’m not able to eat the Tofurkey that the rest of my family eats.) So we tend to have lots of different things: various roasted vegetables, stuffing (my famous “stuffed pan”), mashed potatoes, veggie gravy, cranberry sauce(s), as well as simple vegetables like corn and green beans. My mother and I spent much of yesterday chopping and prepping veggies. I went to bed feeling like we were in pretty good shape.

However, going through my mental list as I lay in bed, I got stuck on the potatoes. I intentionally hadn’t prepped the potatoes, as I didn’t want them to brown. But I also hadn’t really counted them.

Doing my mental calculations of person-to-potato ratios, I suddenly became convinced that I didn’t have nearly enough potatoes. It was almost midnight, and I knew that stores would be closed in the morning. (This didn’t stop me from searching online for various grocery stores and checking their hours). I mentally reconfigured the quantities of potatoes in the roasted root vegetables (in which they traditionally play a key role) and considered what remaining potatoes could be left to mash. I imagined rationing out the paltry portions of potatoes to family and guests.

I agonized over the potatoes. I seriously lost sleep. It was not so much a potato panic as a ponderous potato pessimism.

In the morning, I counted the potatoes. The situation was less dire than I’d imagined in my late-night ravings. But still, I apparently could not let it drop. While walking the dog, I persisted in pondering about potatoes. I texted my friend who would be joining us for dinner: “Do you have any potatoes?”

This is, of course, a totally normal question to ask a friend out of the blue. 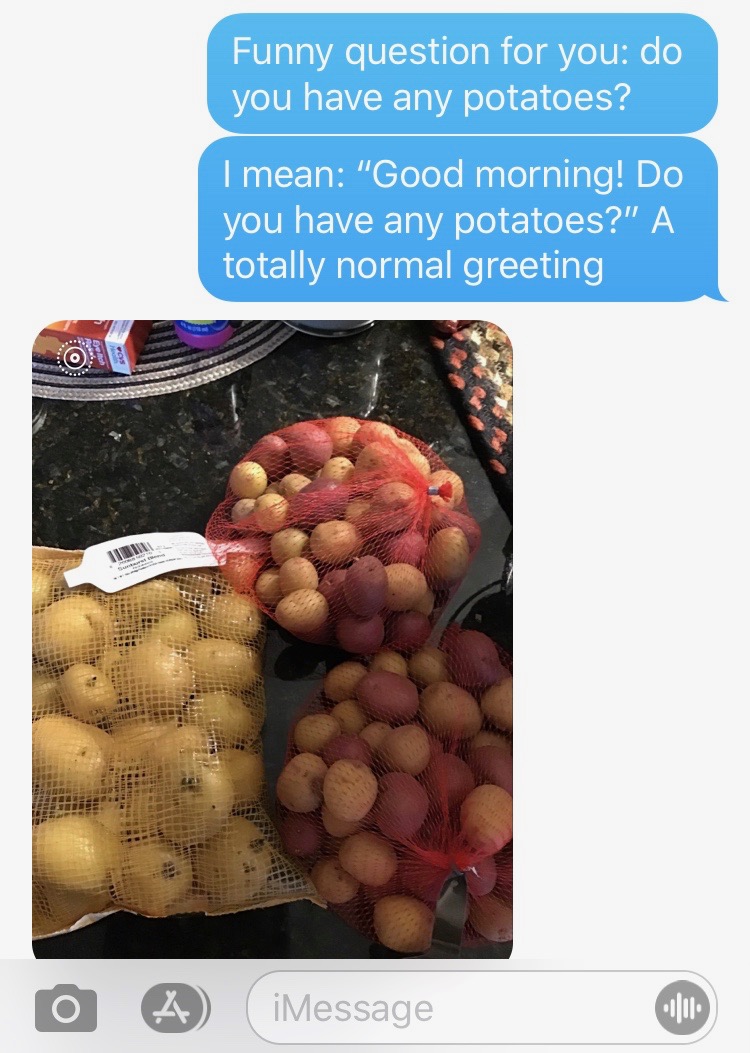 The story has a happy ending. My friend brought along her potatoes, and I added a few of them to my boiling pot of potatoes. The resulting mashed potatoes were of respectable quantities. No garments were rent over tiny potato allowances.

In the end, the meal and the day were successful and fulfilling. I am feeling full of both gratitude and potatoes.

And I have to laugh at myself for getting so worked up about such small potatoes.

I was preparing dinner one evening earlier this month, and this potato caught my eye. 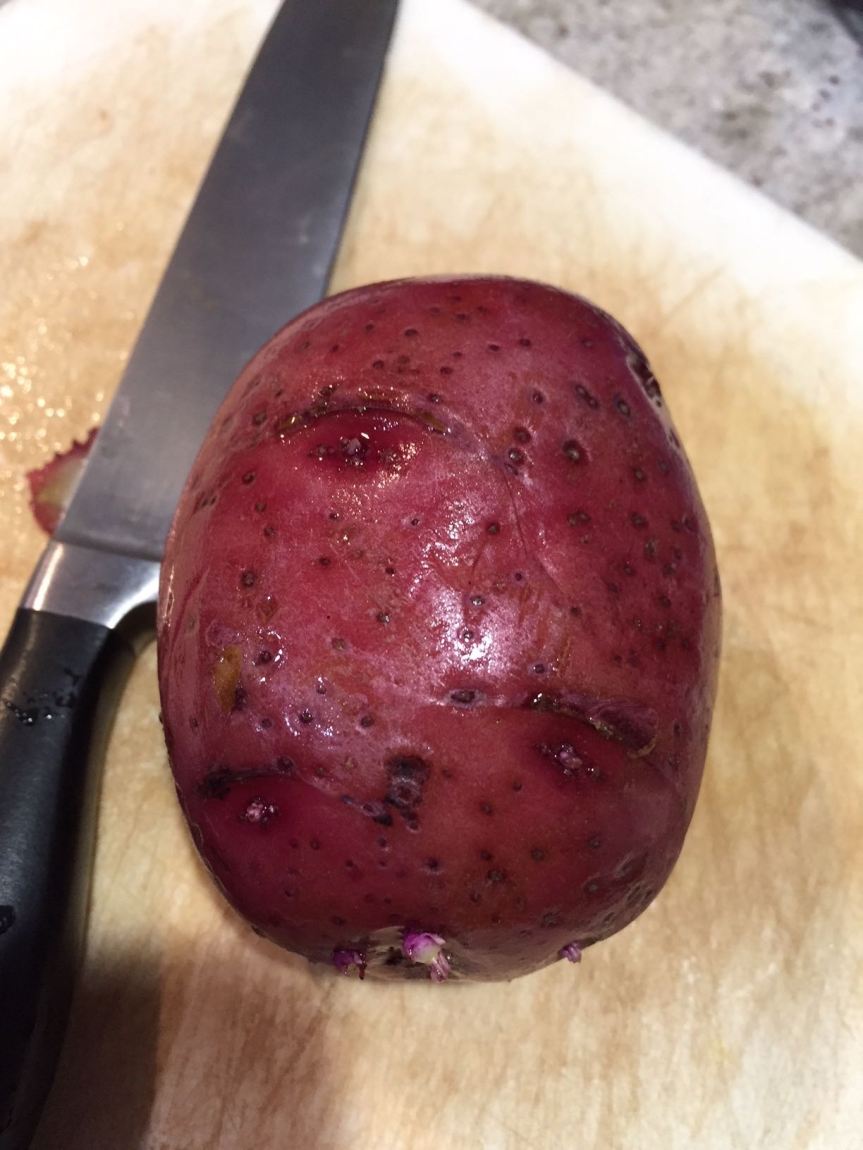 In fact, the potato’s eye caught my eye. And its eyebrow. 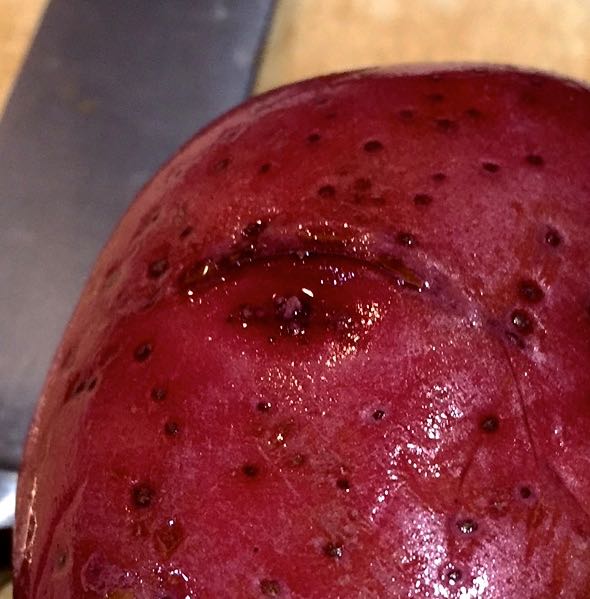 A few nights later, I was again cutting potatoes, and once more, a potato caught my eye. And looked back at me pleadingly. 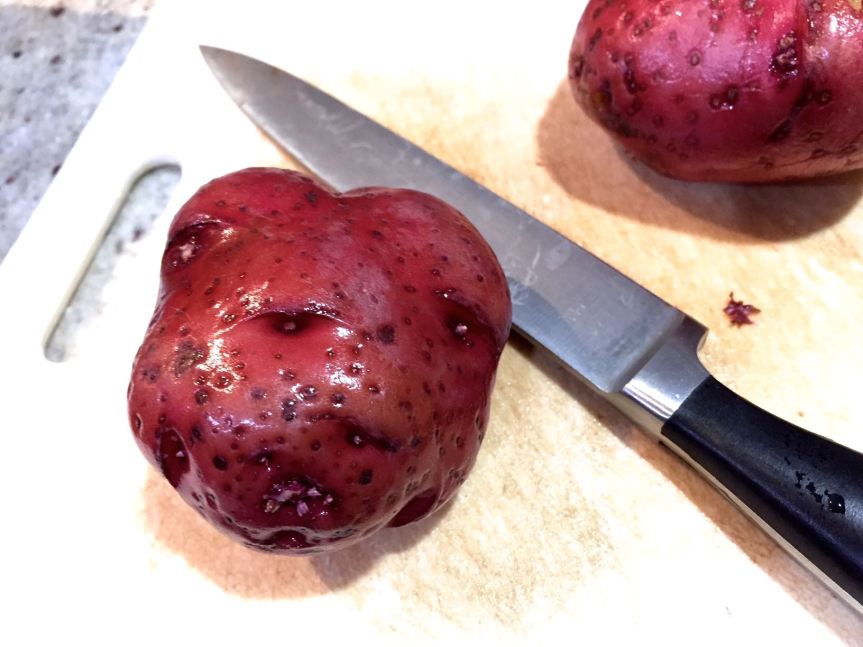 Tell me you don’t see the face. 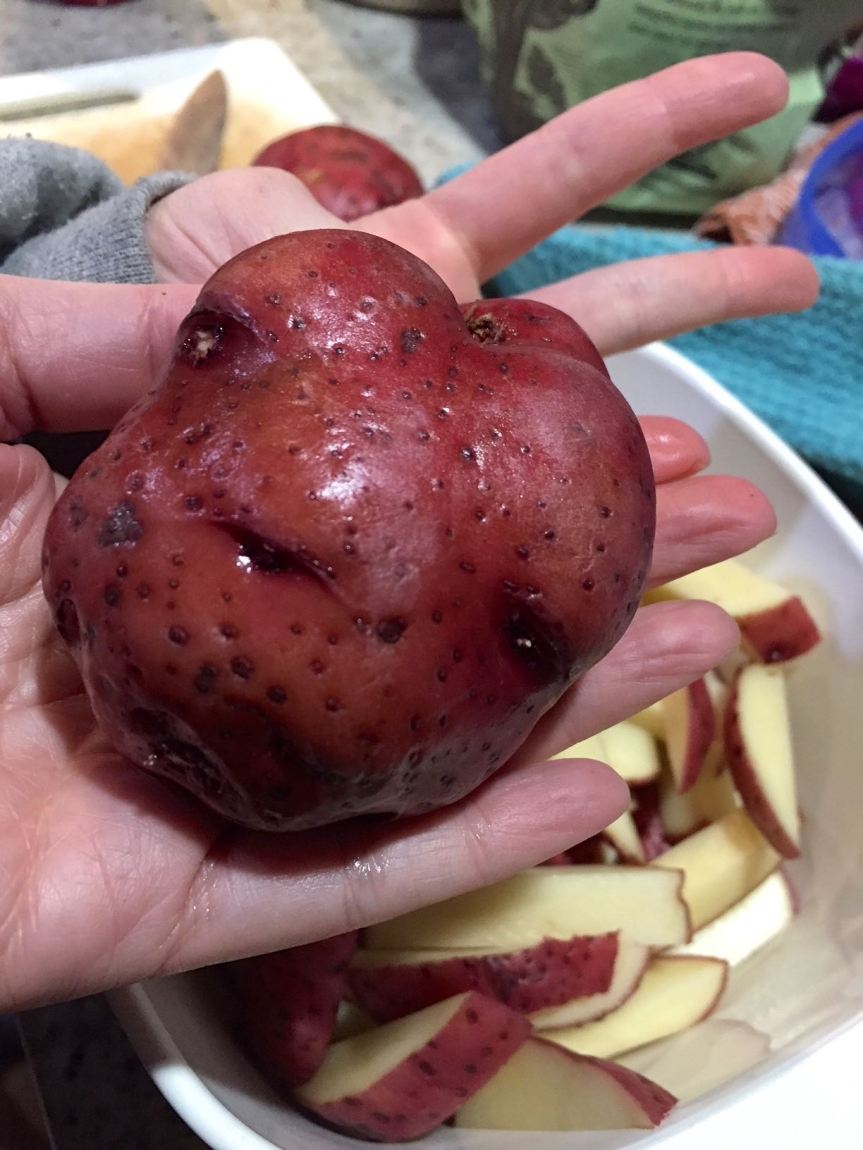 “She must be running out of ideas,” you may be thinking. “Surely she can find something to post about beyond potatoes.”

If you think I’m posting about potatoes because I’m tired and out of ideas, you are only partly right. In fact, this was a planned potato post. At least a partially planned potato post. You see, I have a past of presenting particularly peculiar produce. Witness the sad potato of 2015, the jaunty butternut squash of 2012, and the shifty-looking eggplant of 2011. Somehow, I managed to post each of these on November 21st in years past. This year, though, I guess I forgot. In spite of having prepared the potato pictures, the 21st past with nary a vegetable. (Out of curiosity, I checked the dates when I took the potato photos above. Oddly enough, it was on November 8th and November 13th. And while I did not post them on the 21st, I do notice that the sum of 8 and 13 is 21.) (And really, this part is just me rambling on because it’s late.) 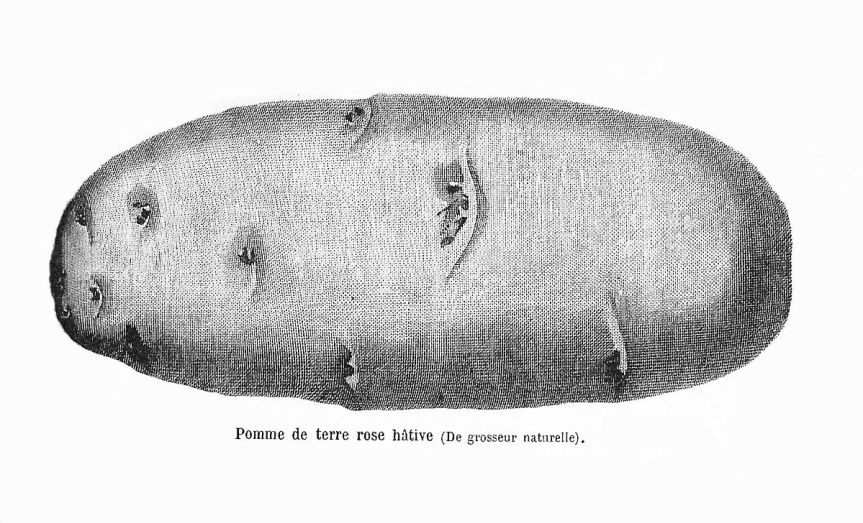 (Et ceci n’est pas une vraie blog post, non plus. I have a big deadline coming up this week, and I have to get crackin’. This will have to stand in for my NaBloPoTaTo post of today.) 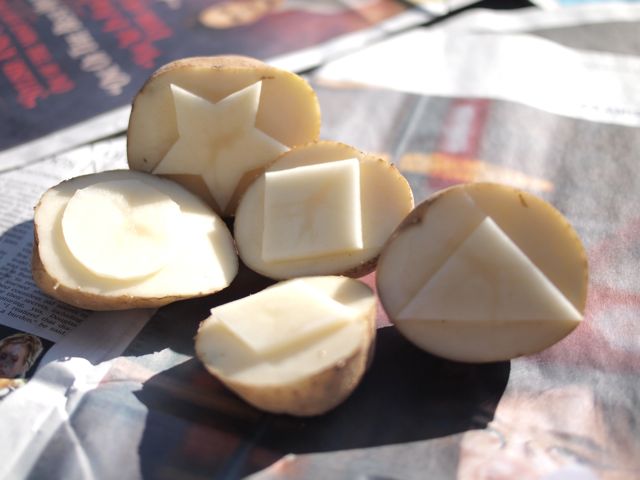 This morning, I decided to do an art project with the kids. Specifically, we made potato prints. (I’ll let you guess what inspired me to do this particular project…) We’re at my in-laws’, and I didn’t want to risk getting paint on the furniture (or walls), so we worked out in the backyard. It was a beautiful day to be outside, but a bit windy for a project involving paper. Phoebe’s tendency to collect piles of rocks came in handy, providng us a ready supply of paperweights. 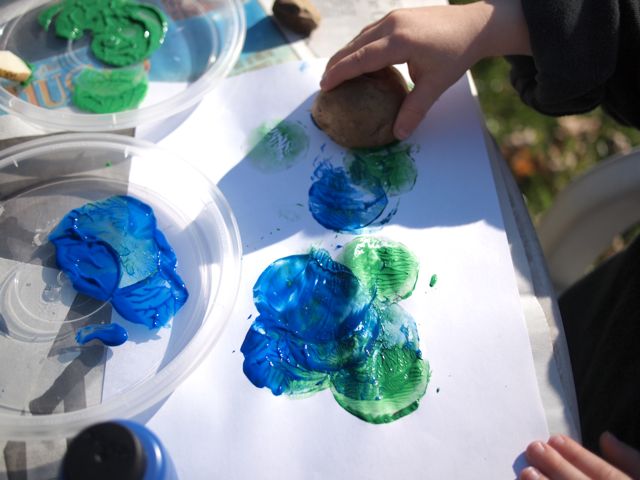 I can’t remember when I last made potato prints. I’m not sure I have done this as an adult, even. It was a lot of fun. (It would have been more fun if not for the wind.) And I did like the way the prints came out. I loved the way the thick paint made veiny patterns on the prints. (We used some washable Crayola paints that John picked up at the grocery store.) 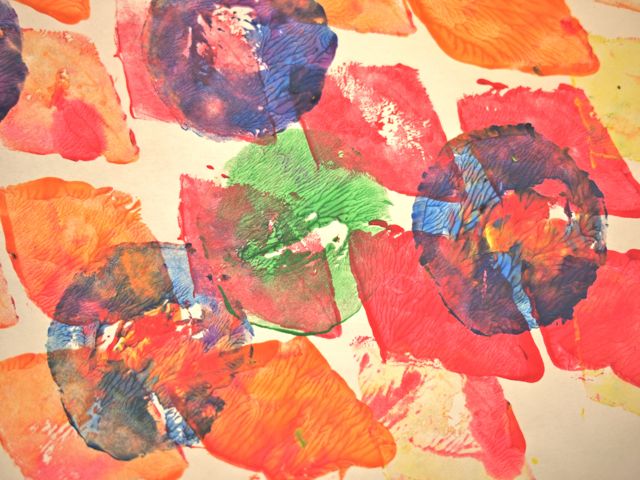