Phoebe and I have now had 7 violin lessons together, and things are going a bit better than the first lesson. We managed to switch to Monday evening, which is much easier, as Phoebe doesn’t have a karate class on Mondays. It’s still been a bit rocky, though. Really, the early stage of learning the violin is not all that exciting. (Well, I suppose there might be different ways of teaching. But Phoebe is learning to do things right. In fact, she’s learning to do them better than I do. I have learned that the way I hold my bow is not entirely correct. ) At this point, the focus is still on how to properly hold and position the bow and violin. It’s been pretty hard to figure out when and how to get Phoebe to practice. The novelty has worn off a bit, and she gets pretty loopy at the end of the day. Plus it’s hard to fit in one more thing to do before bedtime.

On the other hand, I’ve managed to find time to practice, myself. And I’ve been really enjoying it. We have still been working on a book that I used before, from maybe a year or two into my lessons. It’s review, but it’s still challenging, and I’m learning (or relearning) from it. The pace has felt slower, and I like it. I’ve never really been in a hurry learning the violin, as I don’t have any particular goals. (I don’t expect, for example, to ever join an orchestra.) I just like making music. My teacher has had a tendency to push me faster than I really feel the need to, and I suspect that much of this is because most of her other students are eager to get to some sort of destination. I’m just along for the ride.

The lessons themselves have still been a bit of a mixed bag. We’ve figured out a system that works pretty well. Phoebe gets the first half hour lesson, and I wait out in the hallway (which is what other parents of students typically do) and have some time to myself. (It’s not quite peace and quiet, though, as the music store where we have lessons usually has a lot going on. People trying out instruments, and whatnot, and lots of people coming and going.) Then I go in for my half hour lesson, and Phoebe stays in the room and plays games or draws on my iPad. It’s been tricky sometimes as Phoebe will ask me questions, and sometimes talk to me when I’m in the middle of playing. And then tonight we had to interrupt my lesson to run to use the bathroom, because I noticed that Phoebe was bouncing. But overall things have worked enough such that I feel like Phoebe and I are both getting lessons. 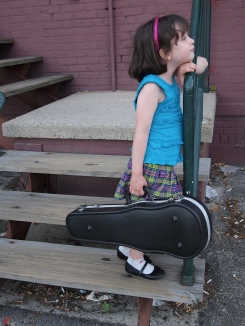 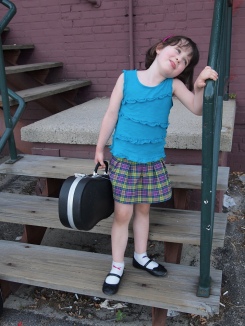 Phoebe was being a bit of a goofball when I asked to take her picture after our lesson. An adorable goofball, though.

7 thoughts on “portrait of girl with violin”

Leave a Reply to de a Cancel reply