Even though I have mostly moved on from photos of leaves to photos of snow and ice, it is still officially fall for another 8 days. I wasn’t especially thinking of that when I took these photos in the woods behind my house this afternoon. I was just admiring the way the fern leaves curled and contrasted with the sharp straight lines of the pine needles. 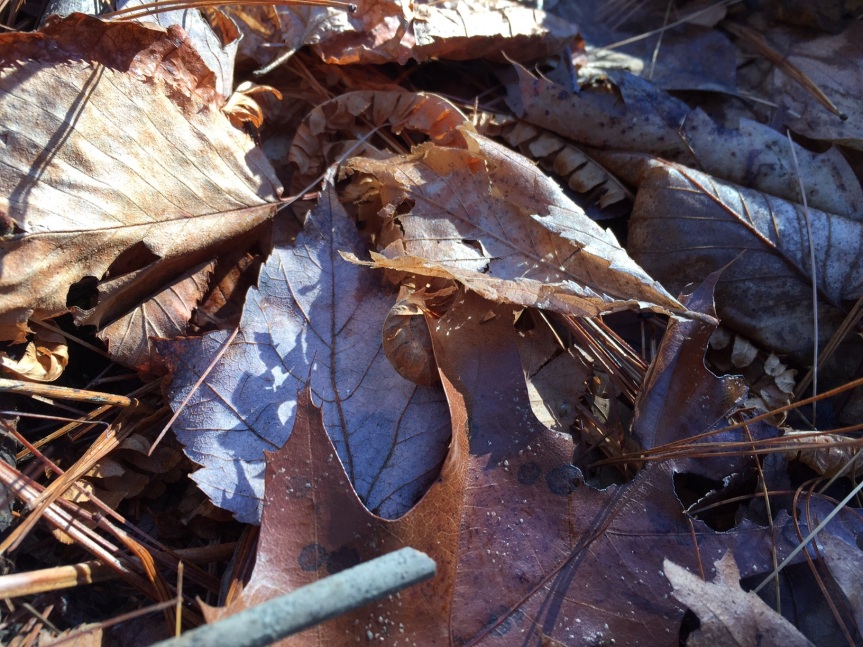 To follow up on yesterday’s post of spirally gates and grates in Boston, here are some spiral-adorned balconies in Sevilla, Spain. While walking through the streets one evening during my visit there in 2009, I looked up to admire the shadows of the balcony gates. 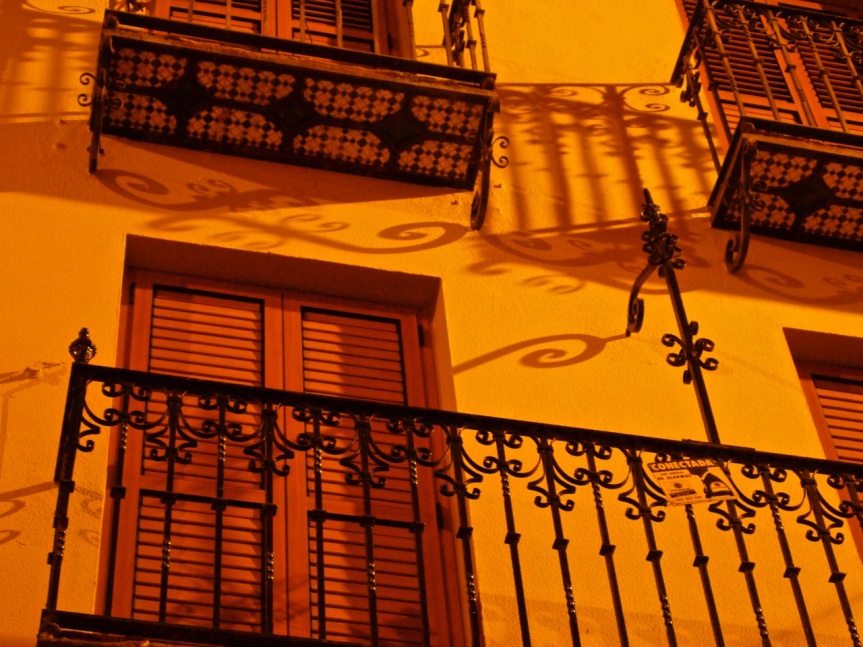 This particular building had lights shining in several directions, producing a pleasing tangle of spirally shadows. 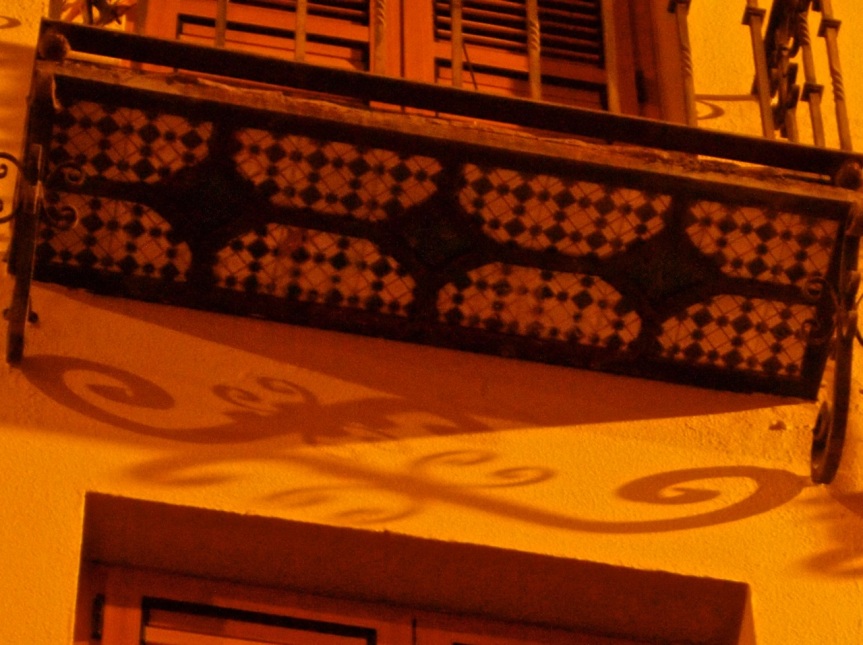 I also enjoy the contrast of the bright orange walls and the dark metal.

Today was a much better day, by the way, and I did not have to fight the urge to stay curled up in a little ball. Things are definitely looking up when I have gotten a bit more sleep. 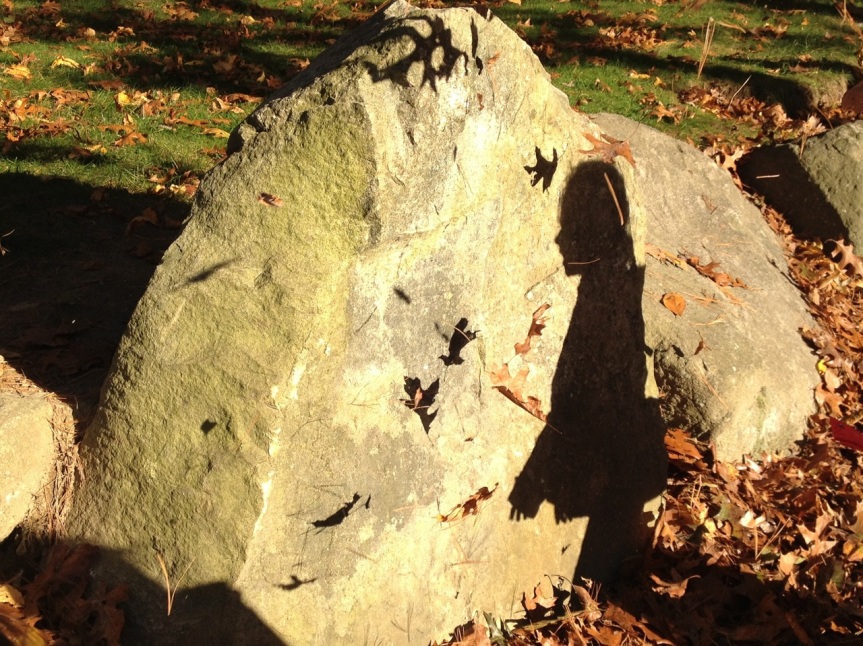 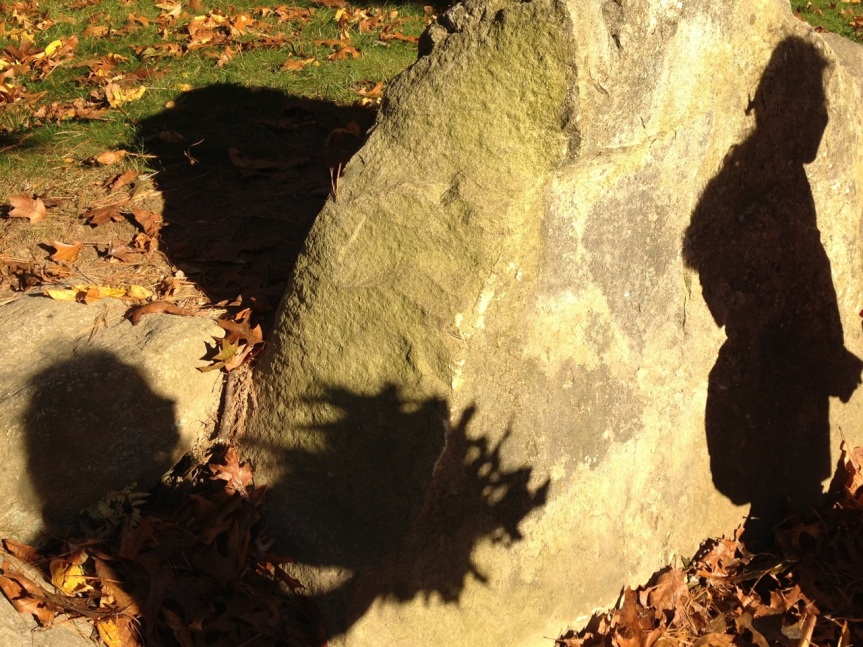 This is a series of photos I took during a visit to the zoo 2 years ago. The late afternoon sun was creating remarkably sharp shadows on this boulder, perfectly projecting the shadows of the kids and their friends as they playfully threw leaves at each other.

This week’s friday foto finder theme is “balloon.” I have quite a few photos of balloons in my photo library, but I decided not to share any of them. Instead, I will share these 3 photos that do not show any actual balloons. Because I am contrary like that. (Also because I think the photos are fun in their implied balloon-ness.)

To see what bunches of balloons others have to offer, pop over to the fff blog! 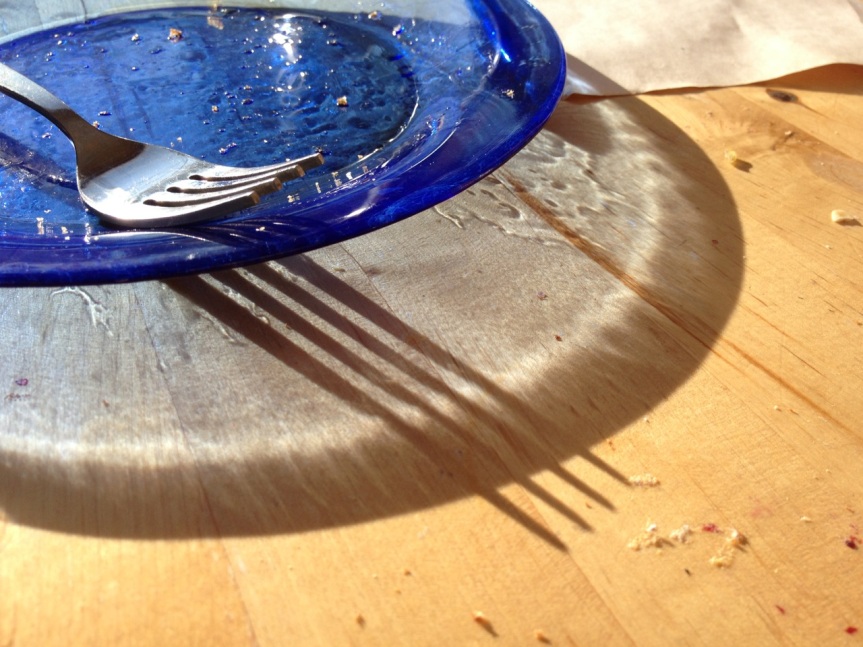 Life has been busy the last few days, full of lots of good things, but leaving me without much time to write much of substance here. In my commitment to posting daily this month, it feels a bit like I’ve been dropping crumbs.¹ I have several posts that are brewing in my head, but not yet ready.² One post that will be coming up soon is thanks to my friend Sarah, who has picked me as one to carry on a meme about the writing process. I entreat you to follow these crumbs to her blog³ and sample her words. Her writing is expertly prepared, rich with buttery layers, and baked to a golden perfection.⁴ If you are like me, you will find her blog to be at once satisfying and leaving you wanting more.⁵

¹ Or scraps and the occasional shard. I admit that I do enjoy the sequence.
² Though with my crumb metaphor, a baking metaphor would be a better one. The dough of several posts is rising in my head? Um…I don’t think so. My brain doesn’t like the sound of that at all.
³ And by that, I mean, click the link.
⁴ I totally just made myself want a croissant.
⁵ She also said some nice things about me.
⁶ This post has a very high footnote to sentence ratio. This footnote doesn’t go with anything, really. I just felt like it. 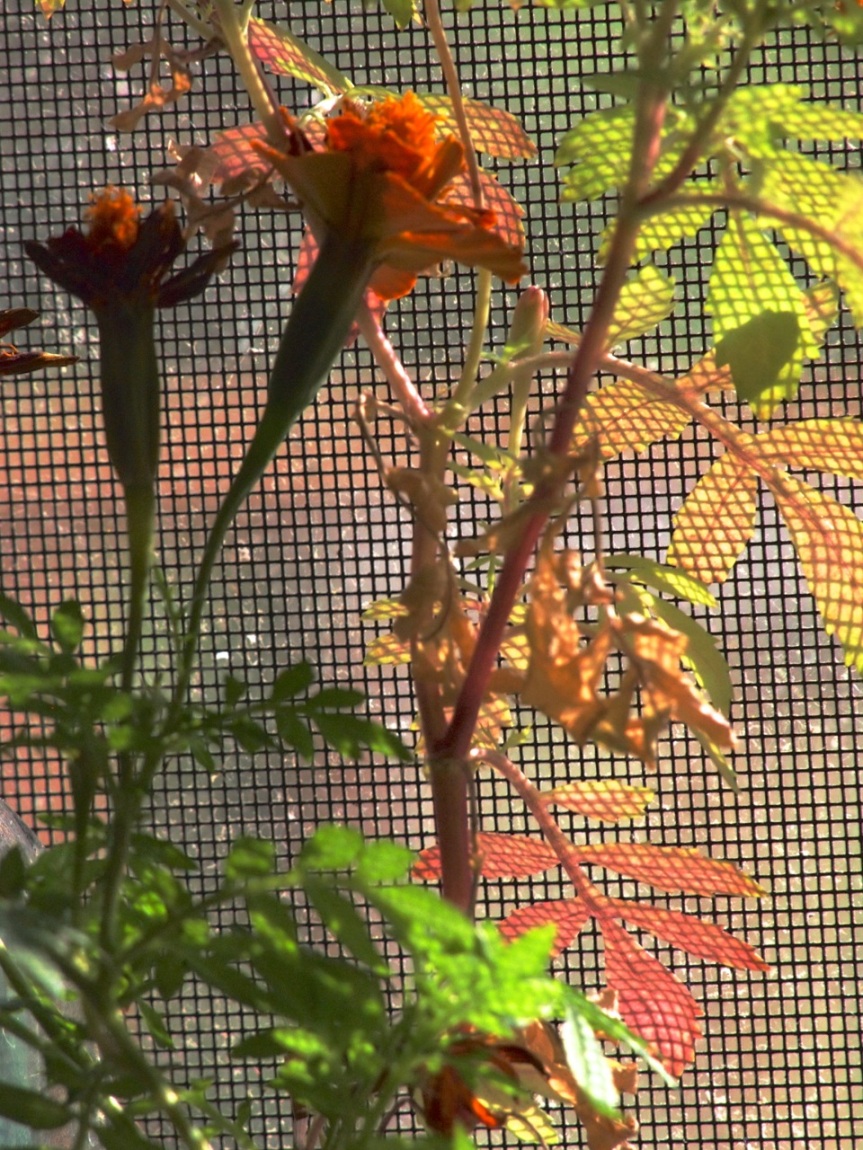 Late this morning, as I went to the kitchen to get a cup of tea, my eyes were caught by the glow of bright colors from the window. Theo had planted some seeds as part of a project in his pre-K class, and they grew into some marigold flowers. Most amazing to me is that John has been watering them, and they not only grew into plants, but are still alive these many weeks and even months later. This is especially remarkable because the only plants that have historically stayed alive in this house have originated in neglected vegetables. 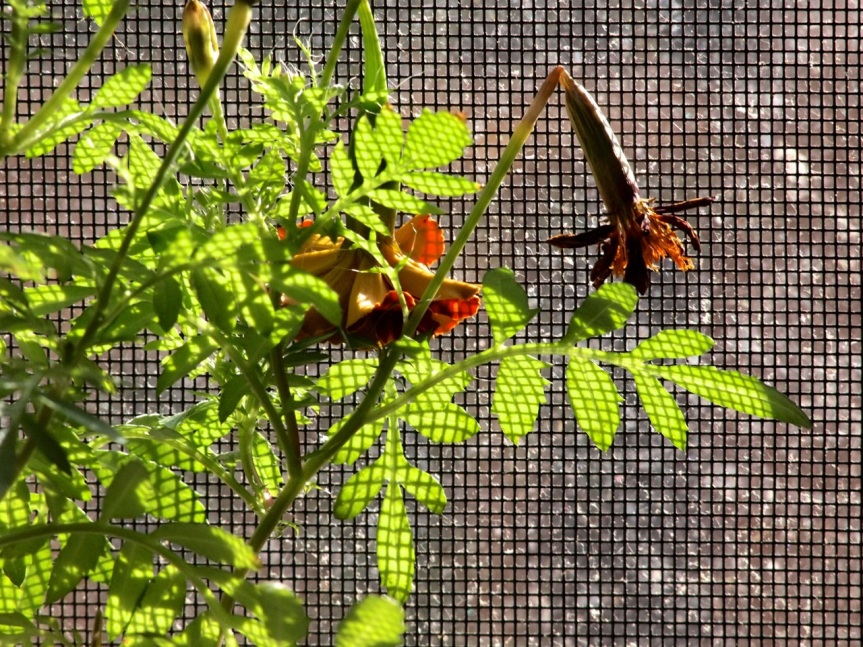 In any case, it was not the survival of the plants that caught my attention, but the interesting patterns produced by the sunlight coming through the screen, casting shadows across the unexpectedly colorful dying leaves and shriveling blooms. I love the warped grid pattern that emerged on so many of the leaves and petals.

I went for my camera, as I knew the light and focus would be too tricky for my phone. I wanted to capture the glow of the plant, and the strikingly patterned leaves, so this was a job for manual focus.

Even with manual focus, it was tricky, but I enjoyed looking through the results.

A few months back, I caught the light from the window lounging on my in-laws’ couch.

This week’s friday foto finder theme is “window.” Funny that I chose a photo without an actual window in it. (Not that I don’t do windows. I have loads of photos of windows and through windows, but this shadow of a window is one that came to mind. Perhaps because today has been a day for lounging on my own couch.) To see what other windows people are doing, peek in through the window at the friday foto finder blog.

When an object casts a shadow, the resulting shadow shape is dependent on a number of factors beyond the characteristics of that object itself. The angle and direction of the light, intensity of the light, number of light sources, and the shape of the surface onto which the shadow is being cast all play a role in the resulting shadow. When the surface in question is varied, the shape of the object casting its shadow gets transformed and distorted. Stairs, with their multiple planes, bend shadows that fall onto them into zig-zaggy shapes. 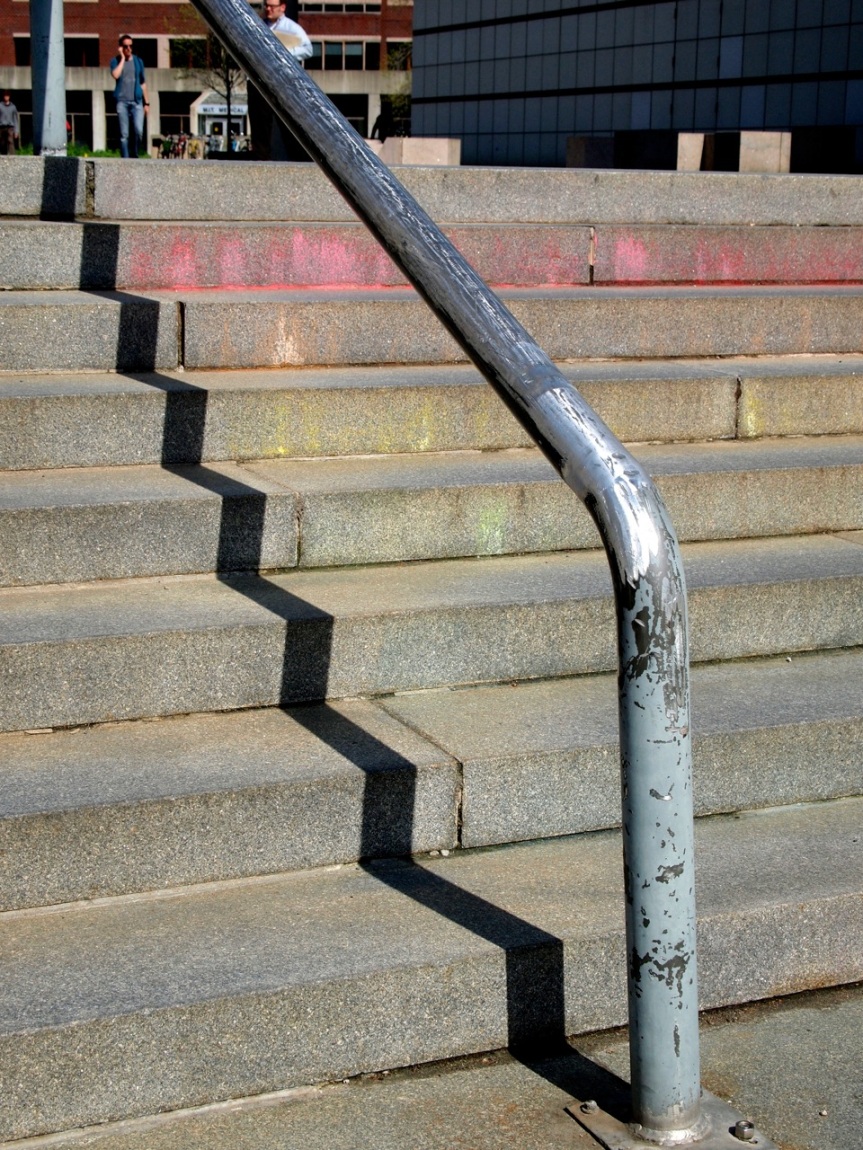 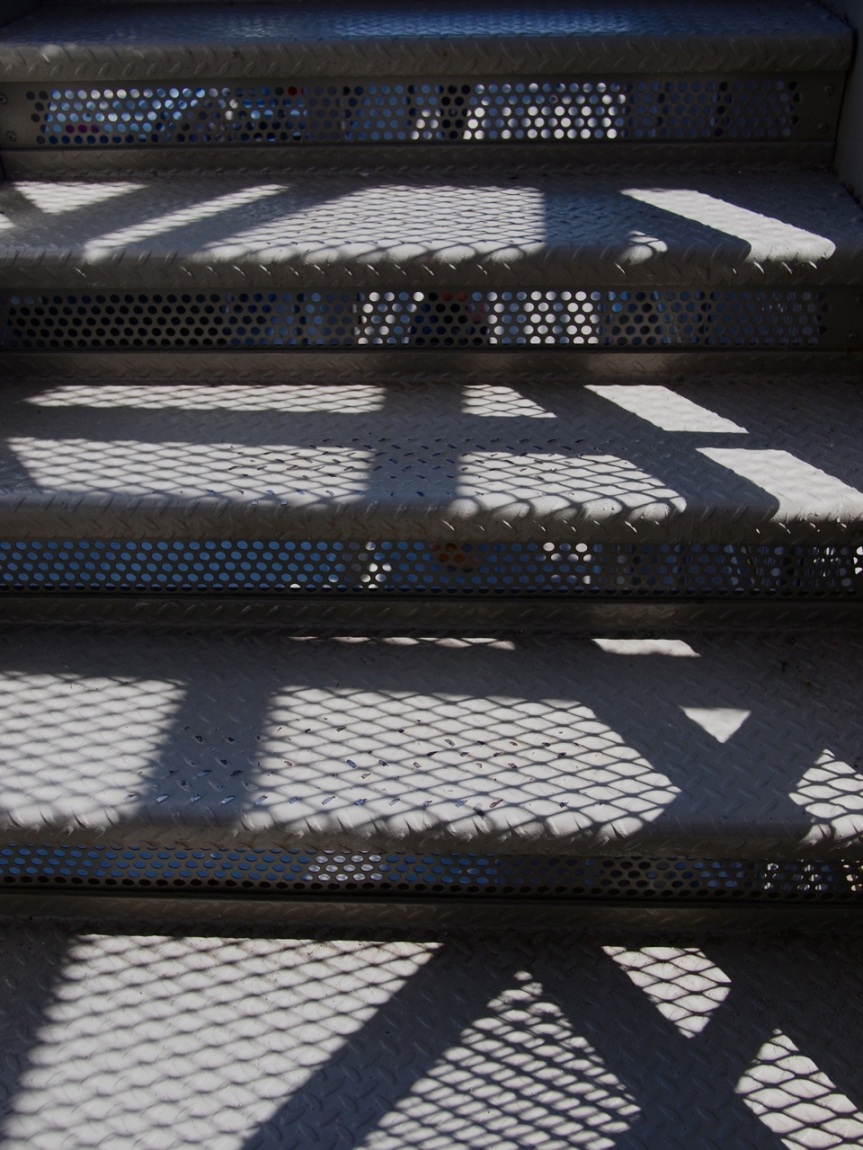 At the karate school, at a nearby Massachusetts town. February, 2013